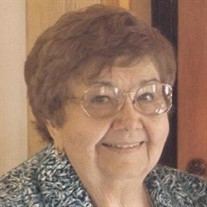 JoAnn Mildred Lees, daughter of Earl and Dorothy (Huff) Shelby, was born on June 16, 1941 in Ingraham Township near Silver City, Iowa. She was baptized and confirmed at St. John’s Lutheran Church in Mineola, Iowa and attended Country School near Silver City and Stanton, Iowa and graduated from Treynor High School with the class of 1958. After graduation she worked as a bookkeeper at City National Bank in Council Bluffs, Iowa. On June 26, 1960, JoAnn was united into marriage to Charles Lees, the son of John and Emma (McCarty) Lees at St. John’s Lutheran Church in Mineola. To this union two children were born: Paul and Cheryl. JoAnn and Charles started their marriage on a farm near Hancock where Paul was born. They then moved to a farm near Malvern, Iowa, where Cheryl was born, and lived there for five years. In 1968, the four of them moved to the farm outside of Avoca where they have lived for the past fifty-one years. JoAnn was involved in various activities and you could always see her working with other in Sunday School, Bible School and 4-H. She loved flowers, gardening, canning, sewing and quilting. She was known for her delicious dinner rolls, egg salad and pies. JoAnn was an avid cat lover and always had a name for each one. On Saturday, July 6, 2019, JoAnn passed away at the Oakland Manor in Oakland, Iowa, having attained the age of seventy-eight years and twenty days. She is preceded in death by her parents: Earl and Dorothy. Left to cherish her memories are her husband of fifty-nine years, Charles of Avoca, Iowa; son Paul (Suzanne) Lees of Walnut, Iowa; daughter Cheryl (Carlos) Carrasco of Litchfield Park, Arizona; grandchildren Erika Lees of Maryville, Missouri; Blaine Lees of Walnut, Iowa; Ashley Lees of Walnut, Iowa; Carly Carrasco of Litchfield Park, Arizona; Cara Carrasco of Litchfield Park, Arizona; sister Janice (Dean) Kruse of Glenwood, Iowa; other family and many friends.

The family of JoAnn Mildred Lees created this Life Tributes page to make it easy to share your memories.

Send flowers to the Lees family.