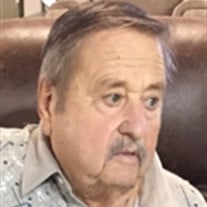 William “Bill” Holzer was born November 30, 1935 in Sioux City, Iowa to Charles William Holzer and Margaret (Hacker) Holzer, where he was baptized, attended school, became an altar boy at a local cathedral, and graduated school. Bill began active service in the army as a Marine Engineer February 24, 1954. He took a short leave to return to marry Charlotte Reinke on March 14, 1955, before returning to complete his active service. He was proud of his military background as well as to serve his country. Bill and Charlotte lived for a short time in Sibley, Iowa, as well as other small towns before moving to Harlan, Iowa in 1964. The couple resided in Harlan for 44 years before moving to Westphalia in 2007. To this union, five children were born: Steve, Tami, Theresa, Tom, and Connie. After jobs that ranged from working in a mental institution to credit bureau reporting, Bill found his passion and started Holzer Fire Equipment in his early years, which tied in greatly with him being a fire fighter. He eventually went to work for Smeal Fire Equipment, that later became Danko Fire Equipment. He and Charlotte retired together in 1997. They enjoyed spending time with their friends here as well as golfing, model trains, watching westerns on TV, and tinkering in his garage, but most of all, he enjoyed spending time with his family. Bill passed away on September 23, 2019 at Jenny Edmundson Hospital in Council Bluffs, Iowa. In addition to his parents, he was preceded in death by his brothers Phillip Holzer and Robert Holzer, and his beloved wife, Charlotte (Reinke) Holzer. Left to cherish his memory are his children: Steve (Jodi) Holzer of Council Bluffs, Iowa; Tami Moritz of Westphalia, Iowa; Theresa Geopfert of Harlan, Iowa; Tom (Trish Hayes) Holzer of Westphalia, Iowa; Connie (Jim Claussen) Lehan of Harlan, Iowa; 11 grandchildren; 25 great grandchildren; 2 great-great grandchildren; several nieces and nephews, cousins, and friends.

The family of William "Bill" Holzer created this Life Tributes page to make it easy to share your memories.

Send flowers to the Holzer family.