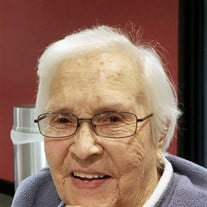 Virginia I. Lind Atkinson, age 98, of Prescott Valley, Arizona, passed away peacefully on Tuesday, December 17, 2019. She was born to George R. and Ethel M. Lind on October 31, 1921 in Goodrich Township, Crawford County, Iowa. Virginia graduated from Denison High School in northwest Iowa. In high school Virginia worked for a family in Denison, receiving room and board in exchange for childcare and housekeeping chores. In 1943 she married Howard C. Atkinson and for the next twenty years was a devoted military wife, as well as a loving mother to her children. Master sergeant Atkinson retired in 1963; in 1980 he and Virginia were divorced. Being a military wife meant lots of moving from location to location, averaging once every three years. Virginia left a lot of good friends in a lot of places! With all this going on she still had time to be active in both the Girl Scouts and the Boy Scouts with her children. Virginia is survived by two daughters, Marilyn Clark of Prescott Valley, Arizona, and Judy Camigi of Dixon, California. She is also survived by her son Timothy D. Reynolds of Little Falls, Minnesota. She was predeceased by her other son Dennis H. Atkinson. Virginia is also survived by 12 grandchildren: Jay Brown, Sharon Schroeder, Nicole Camigi, Django Atkinson, Nels Atkinson, Caitlin Atkinson, and Daphne Green, all of California; Shelly Dusing of Pennsylvania; Heather DeLaPaz of Texas; and Terry Reynolds, Gail Reignier, and JoAnn Van Scoik, all of Minnesota. She is also survived by 17 great-grandchildren and 8 great-great-grandchildren. Finally, Virginia is also survived by her cousin Maxine Lind Domenicali of Armonk, New York, who was born two weeks earlier in 1921. Growing up on a farm in Iowa during the Depression forged within Virginia a strong appreciation for the value of hard work and sacrifice. But despite the attendant hardships, she retained fond memories of her childhood and maintained a cheerfulness that everyone who knew her can remember. A visitation will be held from 2:00 to 3:00 PM, Saturday December 21, 2019, at Pauley Jones & Pfannebecker Funeral Home, 1425 Broadway, in Denison, Iowa, followed directly by a graveside memorial service and interment at the Kiron Cemetery in Kiron, Iowa. Flowers and memorial messages may be sent to Pauley Jones & Pfannebecker Funeral Home, and may also be submitted online at www.pauleyjones.com.

The family of Virginia Inez Atkinson created this Life Tributes page to make it easy to share your memories.

Send flowers to the Atkinson family.