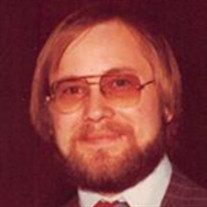 Stephen Craig Knight was born on October 29, 1952 to Raymond and Bonnie (Cox) Knight. He was born at Bisgard Hospital in Harlan, Iowa. Stephen was the second of three children. He was welcomed home by his older sister of three years, Kathleen Ray. His younger (and self-proclaimed favorite) sister, Nancy Jean, was born seven years later. Stephen lovingly held the job of the protective brother, and he always had time for his sisters. Stephen and his sister Nancy were especially close. While Stephen was the brains and planner behind all of their escapades, Nancy was his shadow and apprentice, easily coaxed into his pranks to torment their older sister. It made for many laughs and scoldings from their mother! Stephen loved his parents and was especially close to his Grandma Cox, from whom he had inherited his desire to help others in need and kindness toward everyone, no matter the person or the circumstances. Stephen had a love for music, playing trombone in the high school band and enjoying listening to different kinds of music and musicians, and he was especially fond of Edgar Winter, Led Zeppelin, Pink Floyd, and The Beatles. He had a state of the art stereo system and an album collection like no other, sharing his love of music and many hours of listening to his albums with his younger sister. Stephen also enjoyed all things related to outer space, including rockets and astronomy. One of his favorite Christmas gifts was a telescope, which he enjoyed sharing for viewings of the stars and planets with anyone who was interested. It would not surprise anyone who has known him if he will visit from time to time now, sailing on a falling star. After graduating in 1970 from Harlan Community High School, Stephen attended and graduated from Iowa State University with a degree in computer science. He then moved to Washington, DC area where he worked for the Federal Reserve Board as a system analyst. In 1980, Stephen transferred to the district office of the Federal Reserve in San Francisco, which quickly became his “happy place on Earth.” It is in San Francisco that Stephen’s star truly shined, and he created and sustained life-long friendships. Stephen’s face would light up every time he recalled stories about the adventures he had in this city, and for many years, possibly until his final days, he was plotting his escape from the Midwest to the West Coast. Stephen remained a true friend, and his friends will attest to his giving and caring traits. He was a very private person, some may say even bashful, but his quick wit and great storytelling, as well as his eclectic interests, ranging from comic books to designer watches to Pez dispensers, were appreciated by his family and friends. Due to medical issues, Stephen returned to Harlan to be near family. Although he had a challenging daily life with many setbacks over the years, he never gave up hope, and he remained determined to remain on this earth, despite the challenges he faced. Stephen was preceded in death by his parents, Raymond and Bonnie Knight. Survivors include Kathy (Clen) Lincoln of Fort Dodge, Nancy (David) Jacobs of Harlan, six nieces and nephews, and his lifelong, loyal friends.

Stephen Craig Knight was born on October 29, 1952 to Raymond and Bonnie (Cox) Knight. He was born at Bisgard Hospital in Harlan, Iowa. Stephen was the second of three children. He was welcomed home by his older sister of three years, Kathleen... View Obituary & Service Information

The family of Stephen Craig Knight created this Life Tributes page to make it easy to share your memories.

Send flowers to the Knight family.