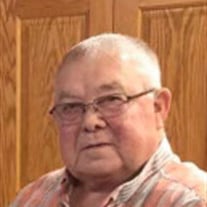 Robert Ernest Andersen was one of four children born to Ernest and Lillian (Johnson) Andersen on May 30, 1944, on the family farm north of Avoca. He was baptized and confirmed in the English Lutheran Church. He attended Avoca grade school and graduated from AvoHa High School in 1962. After high school, he went on to farm before being drafted into the United States Army on February 2, 1967 during the Vietnam War. On July 10, 1976, Robert was united into marriage to Linda Jensen in Blair, Nebraska. After they were married, Robert and Linda made their home on his families Century farm outside of Avoca, and to this union two children were born: Wade and Bobbi. Robert farmed the family farm his entire life. Robert served on the Pottawattamie County Fair Board and as a Commander of the Avoca Legion. He was a member of the Southwest Iowa Vietnam Veterans Last Mans’ Club and in 2017 he was inducted into the Iowa 4-H Hall of Fame. In 2001 he cheated death by surviving a massive heart attack and extensive surgery. In the years following Robert loved farming, playing cards, and watching his grandsons. Robert passed away while planting corn at the Minden farm on Tuesday, April 27, 2021, having attained the age of seventy-six years, ten months and twenty-eight days. He is preceded in death by his parents Ernest and Lillian, his sister Eleanor and her husband Mike Quinn, his sister-in-law Darlene Andersen, and his brother-in-law Charlie Allen. Left to cherish him on earth are his wife of forty-five years, Linda of Avoca, Iowa; children Wade Andersen (Christina Jacobsen) of Persia, Iowa; Bobbi (Mike) Lund of Avoca, Iowa; daughter-in-law Amy (James) Lariviere of Minden, Iowa; grandsons Morgan, Brooks and Bentley Andersen of Persia, Iowa; Brayden, Henry, Andrew and Samuel Lund of Avoca, Iowa; Jaxon Lariviere of Minden, Iowa; sister Laura Ann Allen of Avoca, Iowa; brother Marlin Andersen of Avoca, Iowa; brother-in-law Dennis Jensen of Cambridge, Iowa; nieces and nephews, other family and many friends.

Robert Ernest Andersen was one of four children born to Ernest and Lillian (Johnson) Andersen on May 30, 1944, on the family farm north of Avoca. He was baptized and confirmed in the English Lutheran Church. He attended Avoca grade school... View Obituary & Service Information

The family of Robert E. Andersen created this Life Tributes page to make it easy to share your memories.

Robert Ernest Andersen was one of four children born to Ernest...