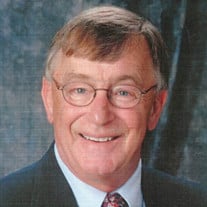 Randall Gene Conrad was born on December 8, 1943 to Alvin and Delores (Bristol) Conrad in Harlan, IA. He went to Lincoln Township Country School #4 through 7th grade and then attended middle and high school in Harlan. Randy was a talented multi-sport athlete. He received a football scholarship upon his graduation from high school in 1962, and went on to play at Morningside College in Sioux City, IA. He also attended college at Wayne State in Wayne, NE. Randy was united in marriage to Sandy (Christensen) on November 21, 1964. They are parents to two sons, Chad, born in 1966 and Brad, born in 1969. Out of college, Randy worked for Sta-Bilt in Harlan. He began a retail management career with Payless Cashways in Sioux City. He accepted an opportunity with Payless and the family moved to Davenport in 1971, where they lived for 15 years. In 1986, an opportunity with COMB found the family moving to the Kansas City area. Randy's retail career continued with Pamida as he and Sandy moved to Estherville and Denison for a time. In 1992, he was named the Executive Director of the Crawford County Development Corporation, where he worked for 12 years. In 2000, Randy and Sandy moved back to Harlan to the family farm he grew up on. For the last several years, Randy has been a real estate broker with Ouren Real Estate in Harlan. Growing up on the farm instilled a love for the country and the outdoors. He enjoyed his old John Deere tractor and the many hours he spent out mowing the acreage. Randy loved sports and especially enjoyed watching his grandchildren in recent years. If you knew Randy, you knew he never met a stranger. His whistle would declare his presence and he loved to be in on a good joke. His quick wit and laughter will be greatly missed. Randy was preceded in death by his parents, Alvin and Delores Conrad; his siblings Sue Swain, David, Delmar, and Mark, and nephew Jason Swain. He is survived by his wife, Sandy, sons Chad (Yoshita) of San Elijio Hills, CA; Brad (Marcy) of Adel, IA; grandchildren Jordan, Haley, Payton, Nathan, Ryan, brothers in law Ron Swain (Marty) (Excelsior, MN), Raymon Pedersen (Patti) (Naples., FL); sisters in law Nancy Conrad (San Marcos, CA), Janette Conrad (San Luis Obispo, CA), Judy Pedersen (Mike Bridgman) (Clermont, FL); and many nieces, nephews and friends.

Randall Gene Conrad was born on December 8, 1943 to Alvin and Delores (Bristol) Conrad in Harlan, IA. He went to Lincoln Township Country School #4 through 7th grade and then attended middle and high school in Harlan. Randy was a talented multi-sport... View Obituary & Service Information

The family of Randall "Randy" Conrad created this Life Tributes page to make it easy to share your memories.

Send flowers to the Conrad family.