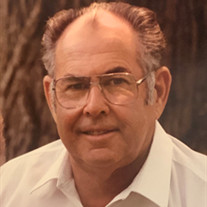 Paul J. “Tootles” Leinen passed away on December 25, 2020 at the age of 94. He was born on March 22, 1926 on a farm outside of Portsmouth, Iowa. As a child during the Great Depression and a teenager during WWII, he was heavily influenced by those early years that shaped and molded who he was and how he approached life. Paul graduated from Portsmouth High School in 1944 and married his wife of 41 years, Barbara Kroeger, on November 27, 1947 in Neola, Iowa. Together they settled in Portsmouth and started a family while Paul was still farming with his father, Michael. On May 10, 1954, Paul purchased a local hardware store. In addition, he started a fertilizer and seed corn business out of the garage of his home. From those humble beginnings Leinen Hardware / Leinen, Inc. would serve the farming communities in and surrounding Shelby County for over 50 years. Paul was very grateful to all of the families that loyally supported the business over those many years. He was proud to be from Iowa (or “Ioway” as he used to say it) and was fiercely loyal to his hometown of Portsmouth. He was a member of St. Mary’s Parish and Our Lady of Fatima Church, the Portsmouth Fire Department, The Knights of Columbus, and was a founding member of the Iowa Western Baseball League. Paul loved the game of baseball and was known for his power at the plate … once hitting a home run off Bob Gibson in exhibition play as well as collecting several base hits against Big League pitcher Ryne Duren in Westphalia. In addition to sports, he loved listening to big band music and dancing with his wife, Barbara. They enjoyed trips to Omaha and Council Bluffs for dinner and dancing at places like Peony Park, The 64 Club and the Pizza King. Paul also loved horse racing and had a long and successful run as an owner of thoroughbreds. He was a master story teller, he loved to grill and entertain, and he and Barbara enjoyed many years of friendship with so many couples in and around the Portsmouth area. Paul was predeceased by his wife, Barbara (Kroeger), a daughter, Mary Beth, his parents, Michael E. and Anna (Sondag) Leinen, his in-laws, Ray and Thelma (Sperry) Kroeger. His brothers: Matthias, Edwin, Michael “Mickey” (Ramona) and twin infants. His sisters: Theodora (Rosy) Rosenthal, Augusta (Wesley) Stamp, Marita (Paul) Bendon, Mary Margaret (John) Langer and Rose Ann (James) Slaven. His brother and sister in-law: Clark and Bernice Kroeger. He is survived by: 6 children: Paul (Mary) Leinen, Susan Leinen, Tim Leinen, David Leinen (Carrie Doerr), Jeff Leinen (Sierra) and Scott Leinen (Kim) 16 Grandchildren: Josh (Elisha) Leinen, Jeremy (Michelle) Leinen, Jaime (Mark) Fritch, Carmen Villageliu, Julia (Ryan) Gilchrist, Paul Villageliu, Matthias Leinen, Dustin Leinen, Kacie Leinen, Cally (Travis) Lee, Caley Doerr, Camila Ruiz, Marcos Ruiz, Taylor (Abbey) Leinen, Buchanan Leinen and Houston Leinen 12 Great Grandchildren: Ethan Leinen, Caitlyn Leinen, Kiron Leinen, Zach Leinen, Sam Leinen, Sydney Leinen, Jack Fritch, Kalan Fritch, Julia Herman, Margot Gilchrist, Phoebe Gilchrist and Caden Lee … and many loved nieces and nephews. Visitation at St. Mary’s Catholic Church in Portsmouth on Wednesday, January 6th from 3 p.m. to 7 p.m. Funeral Mass at St. Mary’s Catholic Church in Portsmouth on Thursday, January 7th, at 10:30 a.m. Graveside service for immediate family only after the funeral mass. In lieu of flowers, memorials are suggested to the Portsmouth Cemetery Association for painting and refurbishment of the crosses and statues.

The family of Paul "Tootles" Leinen Sr. created this Life Tributes page to make it easy to share your memories.

Send flowers to the Leinen family.