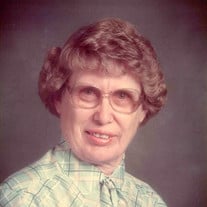 The time of the flapper, the age of romance, the era of F. Scott Fitzgerald, at the dawn of the Roaring 20s . Mildred (Millie) Leona (Kahler) Slechta was born on October 4, 1919, at Waltham, Minn., to Bernhard H. and Leona Marie (Wieck) Kahler. She was baptized on May 21, 1921, at Waltham. Her parents and siblings moved to Denison, where she was raised. She had an older sister, Lorane (McGrath) (deceased) and a younger sister, Opal (Bockelman) (deceased). She also had an older brother, Roland, who died in childhood at age five. She was confirmed on March 25, 1934, at the Presbyterian Church. She attended the Denison Community School system and graduated in 1939. After graduation she attended a commercial school at Sioux City which was a part of Roosevelt's National Youth Association. This education led her to a job at the Crawford County Courthouse, working in both the Clerk of Court's Office and the Relief Office. Always one to enjoy dancing, especially waltzes and polkas, she met her husband, Leslie Joseph Slechta, at the Columbia Dance Hall in Denison during a "Ladies' Chain." Two years later, just prior to World War II, Mildred and Leslie were married on October 12, 1941, at 2 p.m. at the Presbyterian Manse in Vail. Their attendants were her sister, Opal, and her husband, Luverne and Leslie's sister, Wiladene, and her husband, Walter Grell. Rev. D.C. Davis officiated at the ceremony. Millie and Les purchased their first farm north of Vail of 80 acres in Jackson Township for $9,000. They later purchased an additional 380 acres. The farm was for both crops and livestock. They also raised three children: James Leslie (b. November 8, 1943), Judith Ann (b. July 24, 1947; d. June 15, 1964) and Scott Allan (b. August 31, 1958). Millie has always been involved in a variety of activities. After a letter of transfer from the Denison Presbyterian Church to the Vail Presbyterian Church on March 26, 1948, she was the president, the vice-president, and the secretary for the United Presbyterian Women's Group. She was a member of Joy Gleaners; she was a choir member. She was also involved with the church youth as a Sunday School teacher and superintendent and youth leader as well as actively involved with the Vacation Bible School as a teacher and director. She also served the Prospect Hill Presbytery of the Lakes and Prairie Synod as a unit chairman for the sewing and supply committee. She was recognized by the church for 25 years of service. Also active in 4-H, she was a club leader for the Happy Helper's club -- she also received an honor for 25 years of service. Through this involvement, she and her family invited many young adults into their home in the International Foreign Youth Exchange program. They hosted young adults from Columbia, Argentina, India, Africa, and Japan. Millie also chaperoned 4-H trips to Washington, D.C., and served as a camp counselor at the 4-H Camp. Also a Cub Scout leader for two years, she was also a camp counselor for Camp Hantesa. In her neighborhood, she was a charter member of the Helping Neighbor Club, which was established in 1947. For her community involvement, Millie was on the board of directors for Vail Heights, and she lived at Vail Heights prior to her move to Eventide in Denison. As a young girl, Millie was a member of Denison's Order of the Rainbow. This led to her involvement in the Order of the Eastern Star at Vail. She showed her leadership in these various offices: Worth Matron (twice), Associate Matron, Conductress, Associate Conductress, secretary, Adah, Ruth, Esther, Electa, Warden, Chaplain, and Marshall. She was acknowledged for her 50-year membership. For relaxation and for pleasure, she and Les loved to travel. They traveled to the 48 continental states as well as trips to Alaska and Hawaii. They also visited both Canada and Mexico. They enjoyed cruises to the Bahamas, the Carribbean, Alaska, and to Central America, and Millie took two trips to Europe. During her spare time, Mille loved to do hand arts. For many years she decorated a Christmas tree at Denison's McHenry House for the holidays. She crocheted a variety of things, from tablecloths to doll clothes. She made and sold Raggedy Ann and Andy dolls beginning in 1971. She also did a variety of other crafts. In her later years, she began quilting. Her children, grandchildren, and great-grandchildren are fortunate owners of handmade afghans and quilts. James married Faylenne (Bohlmann) on January 27, 1968. Their sons are Steven James, married to Kelly (Licktieg) (children - Stephanie and Matthew) and David Le, married to Ann (Slater) (children - Rylee and twins - Drew and Elle). Scott married Tricia (Horn) (children - Margaret Rachel and son, Grayden; Emily Anne married to Jordan Morris and sons, Baylor and Ryder; Claire Marie engaged to Simon Sargon; and Price Simon). Throughout her 101 years of living, Millie has given meaning to various verses in Ecclesiastes 3: "a time to weep and a time to laugh, a time to seek and a time to cast away, a time to rend and a time to sew, a time to keep silent and a time to speak." Ecclesiastes 3:1: "For everything there is a season and a time for every matter under heaven." She was preceded in death by her brother, her parents, her daughter, her sisters, her husband, and her other in-laws.

The time of the flapper, the age of romance, the era of F. Scott Fitzgerald, at the dawn of the Roaring 20s . Mildred (Millie) Leona (Kahler) Slechta was born on October 4, 1919, at Waltham, Minn., to Bernhard H. and Leona Marie (Wieck) Kahler.... View Obituary & Service Information

The family of Mildred Slechta created this Life Tributes page to make it easy to share your memories.

The time of the flapper, the age of romance, the era of F. Scott...

Send flowers to the Slechta family.