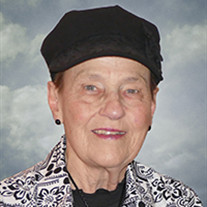 Mildred Clara Reinig (Millie) was born on September 3, 1929, to George and Clara Buman. Because Clara Buman was recovering from an emergency appendectomy a few days earlier, Millie was born at the Harlan Hospital. The fourth of ten children, she was the only one not to be born at home. Millie grew up on her father's farm north of Tennant, Iowa (the same farm where her father had been born and raised.) In those days girls only wore dresses, even at home. It would be embarrassing to be seen wearing pants. But Millie was a tomboy and preferred wearing her older brother's clothes after he had outgrown them. Millie attended grade school and high school in Tennant. There were only seven students in her high school class - five boys and two girls. Millie and her female classmate both elected to take shop which was unusual at a time when only boys took shop. It launched a lifelong hobby of wood crafting. After graduating from high school in 1947, Millie attended St. Joseph's School of Nursing in Omaha. While in nurses training, she met Alvin Reinig while attending a dance in Portsmouth one weekend. After an extended courtship and engagement (nursing students were not allowed to be married), Al and Millie were married on December 30, 1950, on the second floor of St. Mary's Catholic School in Portsmouth, Iowa. Six weeks later, Al was inducted into the Army and went to Camp Carson in Colorado. On October 9, 1951, Millie sent Al a telegram that read, "BORN 1AM TODAY 7 POUND GIRL BOTH FINE LOVE MILDRED." Al was discharged in 1953, and in 1959, Al and Millie moved their growing family to a farm they purchased north of Portsmouth. They would live there for the next 33 years, working, praying, and raising their family. They were active members of St. Mary's Catholic Church in Portsmouth and Millie enjoyed playing guitar for many masses. In 1992 Millie and Al moved to Harlan and joined St. Michael's parish. Millie died on March 12, 2022, at the age of 92 at Midlands Living Center in Council Bluffs, Iowa. She will be lovingly remembered for her devotion to her family, her faith, the great meals she prepared and the cakes she decorated for her family, and her unfailing ability to make or repair just about anything! She is preceded in death by her husband Alvin, her parents George and Clara (Sizer) Buman and by four of her siblings: Rosemary Free, Ralph Buman, Evelyn Fedorka, and Will Buman (infant), She is survived by her five children: Theresa (James, deceased) Caffrey of Omaha, NE; Patricia (Paul) Koffron of Tiffin, IA; Thomas (Denise) Reinig of Portsmouth, IA; Karen (Jerry) Bexten of Omaha, NE; and Janet Reinig (Jody Ruckman) of Omaha, NE; brothers Joe Buman of Harlan, IA; John Buman of Hayward, WI; sisters Loanne Reinig of Portsmouth, Marita Heese of Parkville, MO; and Jeannette Pawoll of Colorado Springs; and by thirteen grandchildren and fifteen great grandchildren. In lieu of flowers, family suggests memorials be made to Shelby County Catholic School.

Mildred Clara Reinig (Millie) was born on September 3, 1929, to George and Clara Buman. Because Clara Buman was recovering from an emergency appendectomy a few days earlier, Millie was born at the Harlan Hospital. The fourth of ten children,... View Obituary & Service Information

The family of Mildred Clara Reinig created this Life Tributes page to make it easy to share your memories.