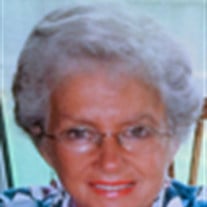 On Sunday September 29, 2019 Freda Maxine Peterman Boeck , loving wife of H. Dwain Boeck and mother of 5 children, 9 grandchildren and 7 great grandchildren, passed away at the age of 89 years. Freda was born in New Market, Iowa on December 30, 1929 to Edward and Sylvia Evans Peterman. After high school she went to Omaha and attended college there for 2 years where she met the man she would marry. Not knowing they would be married 69 years, 10 months. She married H. Dwain on December 10, 1949. They raised 2 sons, Roger and Galen, and 3 daughters, Nancy, Karen and Gail. No matter what Freda got interested in she put her heart and soul into it. She loved to play the piano and organ and played for the church several years. Her and Dwain farmed for 22 years, ran the International Harvester for 17 years and The Shoe Box for 10 years. She was also very involved in Eastern Star and served as grand officer for the Lamp Lighters. During the years she learned to play golf and they became winter Texans to Mission, Texas. In 2016 her and Dwain became residents of Texas and moved into assisted living in Harlingen, Texas. Her passion the last few years with Gail as her card partner was to beat Dwain and Karen at Cribbage, Euchre, and 500. Freda was preceded in death by her father, Edward; mother, Sylvia; and brothers Donald and Paul. She is survived by her husband Dwain, children Roger, Nancy, Karen, Gail, and Galen; sister Dwaylah Jean; several grandchildren, Amanda, Joshua and Caleb Boeck, Mathew Ferry, Abby Heinz, Michaela Fiksdale and husband Billy, Haley Mackey and husband Michael, Jacqueline Assman and husband Charles, Emily Boeck, step grandchildren, great grandchildren, nieces, nephews and cousins. Service will be held on Saturday, October 19, 2019 at 10:30 am at Congregational Christian Church in Harlan, Iowa. Flowers may be sent to the church, donations will be given to Freda’s charity St. Jude’s Hospital.

The family of Freda Maxine Boeck created this Life Tributes page to make it easy to share your memories.

Send flowers to the Boeck family.