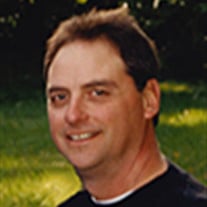 Bradney Ray McQueen was born on December 7, 1954 to Wayland and Mary (Oviatt) McQueen in Shenandoah, Iowa. Brad graduated from Farragut High School in 1973 and Iowa Western Community College in Criminal Justice. On September 10, 1977 Brad was united in marriage to Cathy (Marco) McQueen, 2 daughters were born to this union; Rebecca and Breanne. Brad started his career in law enforcement with the Shenandoah Police Department and then moved to Harlan in 1976 where he joined the Harlan Police Department and finished his career with the Shelby County Sheriff's Office in 1998 where he acquired a host of lifelong friends. Brad also served as a member of the Harlan Fire Department for many years. After his career in law enforcement, Brad followed his passion into woodworking and eventually to the construction field. In 2002, Brad was injured in a construction accident where he suffered a traumatic brain injury which ultimately forced him to retire. Brad went on to do various part time work but was most proud of helping his brother with his carpet cleaning business, McQueen's Carpet Cleaning. Brad wore those shirts with pride. For the past few golf seasons, Brad enjoyed the summer months mowing the grounds and helping out at the north course. Brad was a very active and rambunctious child. He grew up helping his father on their farm, participating in many clubs, groups and band but ultimately, Brad loved his sports. After a very active high school athletic career, Brad enjoyed playing years of slow pitch softball on many teams, again, acquiring many lifelong friends. Softball led to the Annual Okoboji trips not only for softball but the "Annual Okoboji Golf Tournament" for which Brad made the trophies - everyone got a trophy for something no matter how good or how bad you were, many still have these gems. During the years Brad was an active league bowler and of course a golfer - he was still golfing with family when time allowed but ALWAYS looked forward to his standing golf dates with his "brother from another mother" George Rasmussen. Brad loved socializing and stayed in close contact with his many daily and weekly phone calls to his family and friends. He also enjoyed heading uptown to see what the crew was up to or to cheer on his favorite teams while celebrating his Scottish heritage in one of his homemade kilts or head to toe sports themed outfits. Aside from all other, Brad's biggest joy were his three precious grandchildren. He loved watching them grow and following them on their many activities. "Grandpa" was a role he took seriously with pride and adoration. In December of 2017 Brad was diagnosed with Stage 4 lung cancer and endured many levels of treatment, all with a positive attitude. Friends and family were there for him and always had his back during this difficult time but he couldn't have asked for a better support duo than Becci and Bre who helped him every step of the way. Things with the cancer began changing during the past 6 months but his positive outlook remained the same, strong and determined. Brad lost his battle early on the morning of his 67th birthday with his "duo" by his side. Brad was proceeded in death by his loving parents, Wayland and Mary McQueen and in-laws, Swede and Minnie Marco. Brad is survived by his daughters, Becci and her husband Mike Kempf, Breanne and her husband Gene Fuhs and grandchildren, Ryleigh Elizabeth Fuhs, Paige Harper Fuhs and Hollis John Kempf all of Harlan, Iowa. Sister Judie O'Connor of Newton, Iowa and brothers Ron and his wife Linda McQueen and Roger and his wife Julie McQueen all of Shenandoah, Iowa. "Grandma" to his "Grandpa", Cathy of Harlan and many very special nieces and nephews along with many other family and friends. To quote the lyrics of a song that inspired Brad: I've lived a life that's full, I traveled each and every highway. And more, much more I did it, I did it my way!

The family of Bradney Ray McQueen created this Life Tributes page to make it easy to share your memories.

Send flowers to the McQueen family.