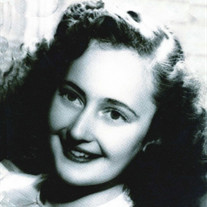 Bonnie Jean Cox was born on June 24, 1927 to Harrell and Sylvia (Sorensen) Cox. She was born in the upstairs bedroom of her paternal grandparents’ house on Court Street. A sister, Betty Grace arrived 13 months later. Her brother Jack Harrell made his appearance in December of 1930. Bonnie and her sister were especially close and were great playmates and best friends. The little family moved from Harlan to the Cuppy’s Grove area shortly after Jack’s birth and lived on an acreage next to Bonnie’s maternal grandparents, Jens and Laura (Rasmussen) Sorensen. It was there that Bonnie started country school in first grade at the age of five. There were a lot of fun times and adventures while they were living in the country. After the death of Bonnie’s grandfather, George Cox, the family returned to Harlan to move in with and care for her grandmother, Emma. The Children would take turns through the summers staying with grandparents Jens and Laura Sorensen on their farm near Diagonal Iowa. Their time visiting was something they all looked forward to each year. Bonnie completed her education at Harlan High School in 1944. She was honored to be chosen as Homecoming Queen that school year. She also served on the staff of the yearbook. Her first job after graduation was at the Harlan National Bank. In 1945 her Grandpa Sorensen passed away suddenly and her Grandma Sorensen decided to travel to California to visit relatives there. Bonnie went along as her companion. She was offered an opportunity to attend Glendale Community College so she stayed in California. While attending the junior college there she worked in an ice cream shop and then use her secretarial skills while working at the Glendale office of Lloyds of London Insurance. When Bonnie returned to Harlan she took a job as secretary to the high school principal, Mr. Jamison. It was during that time that she attended a neighborhood birthday party. She commented how good the black walnut cake that was served that day tasted. The woman that brought the cake asked her if she would like to meet the boy who made it. The rest is history. The young man was Raymond Jean Knight and their first date was chaperoned by Clara Jensen, the women that introduced them. Raymond and Bonnie were married June 13, 1948 at Bethel Baptist Church in Harlan. Kathleen Ray was born in August 1959. Bonnie left her secretarial job and began working in the family bakery business. Raymond’s parents had moved to Harlan from Des Moines in 1946 to open Knight’s Harlan Bakery on the square. Raymond and Bonnie became co-owners then bought out his parents’ share of the business and became sole owners in 1963. The work involved a lot of hours together. The couple worked there together until they sold the business in December 1991. Bonnie is preceded in death by her husband Raymond Knight in 2003, her sister Betty Grace Wiuff in 1950, her brother Jack Harrell Cox in 2019 and her parents, Harrell and Syliva (Sorensen) Cox. Surviving are children: Kathleen (Clen) Lincoln of Fort Dodge, Stephen of Harlan and Nancy (David) Jacobs of Harlan; grandchildren: Aaron (Sara) Lincoln, Brian (Janel) Lincoln, Carrie Neilsen, Emily (Chris) Dennis, Katie (Matt) Crawford and Daniel (Cora) Jacobs. She also leaves fifteen great grandchildren. A Private Family Funeral Service will be held Monday, November 23, 2020 at Pauley Jones Funeral Home in Harlan.

Bonnie Jean Cox was born on June 24, 1927 to Harrell and Sylvia (Sorensen) Cox. She was born in the upstairs bedroom of her paternal grandparents&#8217; house on Court Street. A sister, Betty Grace arrived 13 months later. Her brother Jack... View Obituary & Service Information

The family of Bonnie J. Knight created this Life Tributes page to make it easy to share your memories.

Send flowers to the Knight family.