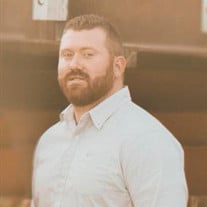 Andrew “Andy” Jacob Redinbaugh, son of Mike Redinbaugh and Christi (Mortensen) Evans, was born on May 31, 1994 in Omaha, Nebraska. He was one of five siblings and grew up in Shelby, Iowa. He was baptized and confirmed at the Shelby Methodist Church. He was a graduate of AHST High School in Avoca with the class of 2012. After graduation he attend Kirkwood Community College where he graduated with an Associate’s Degree in AG Diesel and GPS Technology. During high school, Andy was involved in Football, Wrestling, Track and Baseball. He loved the Iowa State Cyclones and the Minnesota Vikings. You could most likely find him fishing, camping, riding his ATV, being with his family and friends and most importantly cheering on his nephews in everything they did, especially sporting activities. He also enjoyed spending time with his pets; Cy, Copper and Rylie. He will be missed for his jokes, his laugh and always being able to have a good time. He was most recently employed by Scoular in Hancock, Iowa but worked for John Deere and The Cornstalk in Shelby. Andy passed away on Sunday, December 20, 2020, from injuries sustained in a car accident, having attained the age of twenty-six years, six months and twenty days. He was preceded in death by both his maternal grandparents George and Pat Mortensen and paternal grandparents Vern and June Redinbaugh. Those left to cherish his memory are his mother Christi (Steve) Evans of Shelby, Iowa; father Mike Redinbaugh of Neola, Iowa; siblings Cheryl Hawkins (Jason Engle) of Avoca, Iowa; Tricia Madsen of Shelby, Iowa; Dusty Redinbaugh of Shelby, Iowa; Amanda (Ian) Spohn of Shelby, Iowa; nephews Gabe and Jaicob Madsen of Shelby, Iowa and Connor Hawkins of Avoca, Iowa; nieces Jayna and Alyssa Engle of Avoca, Iowa; other family and many, many friends.

Andrew &#8220;Andy&#8221; Jacob Redinbaugh, son of Mike Redinbaugh and Christi (Mortensen) Evans, was born on May 31, 1994 in Omaha, Nebraska. He was one of five siblings and grew up in Shelby, Iowa. He was baptized and confirmed at the Shelby... View Obituary & Service Information

The family of Andy Jacob Redinbaugh created this Life Tributes page to make it easy to share your memories.

Send flowers to the Redinbaugh family.