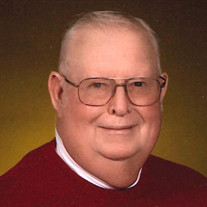 William Henry Roof, son of Carl and Cora (Plate) Roof, was born on October 14, 1935, in Searsboro, Iowa. Upon graduation from high school, Bill was inducted into the United States Air Force where he was stationed in Germany and served from 1955-1959. After being discharged from the Air Force, Bill attended the American Institute of Business in Des Moines and graduated in 1961. Bill was united in marriage to Ann Christi Gronborg on November 23, 1960, at the English Lutheran Church in Avoca. To this union two children were born: Neil and Elizabeth. Bill was an accountant for 40 years for Wilson Foods and retired in 1998 and then Bill and Ann moved to Avoca in 1999. He was a golfer, loved to bowl, played games on his electronics, was active member in the Lion’s Club for over 20 years, He was actively involved in the Men’s Club at the Bethel Lutheran Church in Cherokee and Trinity Lutheran Church in Avoca, was the treasurer for the Good Shepherd Lutheran Church in Des Moines and Bethesda Lutheran Church in Clarinda, and was a 5+ gallon blood donor. Bill passed away on Thursday, March 3, 2022, at Myrtue Medical Center in Harlan, having attained the age of 86 years, 4 months and 17 days. He was preceded in death by his parents; siblings Donald, Alice and Eleanor; and brother-in-law LeRoy Smith. Left to cherish his memory is his wife Ann Roof of Avoca, Iowa; son Neil Roof and his wife Amanda of Avoca, Iowa; daughter Elizabeth Graham and her husband Gavin of Mapleton, Illinois; 4 grandchildren: Dustin Roof and his wife Shayla of Council Bluffs, Iowa, Kaitlyn Sweet and her husband Wes of Mapleton, Illinois, Kourtney Graham and Kristen Graham; 3 great grandchildren Santana and Houston Roof of Council Bluffs, Iowa, Gavin Sweet of Mapleton, Illinois; brother Keith (JoDee) Roof of North Liberty, Iowa; sister-in-law Betty Roof of Grinnell, Iowa; other family and many friends.

William Henry Roof, son of Carl and Cora (Plate) Roof, was born on October 14, 1935, in Searsboro, Iowa. Upon graduation from high school, Bill was inducted into the United States Air Force where he was stationed in Germany and served from... View Obituary & Service Information

Please direct all memorials to the family of William Roof. Thank you!

Send flowers to the Roof family.