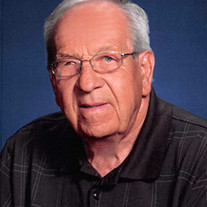 William John Erlbacher was born on November 24,1938 on the family farm three miles north of Earling, he was the youngest of six children of Leonard and Valeria. Bill attended St. Joseph's Catholic School where he enjoyed playing basketball and baseball, graduating in 1957. In 1962 Bill married Joan Gross, also from rural Earling, where they raised six children, Michelle, Jacquie, Mike, Dave, Shawn, and Chad. Being raised on the family farm taught Bill the meaning of an honest day's work, this work ethic would endure for over 30 years. In 1961, Bill and brother-in-law Owen Heese partnered and purchased the Skelly service station; they also built three car washes over their 30-year relationship. The success Bill and Owen shared is a testimony of hard work, friendship and respect. Later Bill purchased a Casey's store then built and operated another car wash with his son until his retirement in 2010. Bill influenced his son Shawn, son-in-law Corrie, brother-in-law Damian Gross and good friend John Bruck to each build successful car washes of their own, a tribute to his business sense. Bill was a great husband, father, grandfather and a friend to so many people. Bill enjoyed family vacations to Okoboji, and reunions with the inlaws. There was nothing more entertaining than listening to the dry humor of Dickie Erlbacher as Donnie, Al Greave and Denny Kohles laughed along. Fishing trips to South Dakota with Corrie and his family were also special to Bill, he loved a cup of coffee and conversation more than the size of the fish. Bill loved his grandkids, they came second to none, adamantly attending their sporting, school or church functions were of utmost importance. Bingo night, pickup rides, and ice cream were always a favorite with the kids. Whether He was caring for a baby while her mother attended college or hosting a weekend with four busy girls, those moments meant the world to him. The one constant in Bill’s life was his faith in God, reflected in his church attendance, community service and moral code, with the hope of attaining the glory of eternal life. Bill led a good life, he was a hard working man, a good husband and provider for his family, a good friend to all, and a humble servant of our Lord. Thank you, Bill, for your life, shared! Bill died March 29, 2022 and was preceded in death by his parents Leonard and Valeria Erlbacher, his son Chad Erlbacher, his sister Grace Heese, brothers Donald and Richard Erlbacher. He is survived by his wife Joanie Erlbacher of Earling, IA; children Michelle Kenkel of Omaha, NE; Jacquie (Corrie) Vrbicky of Omaha, NE; Michael (Susan) Erlbacher of Harlan, IA; David (Jolene) Erlbacher of Harlan, IA; Shawn (KhaTu) Erlbacher of Papillion, NE; 16 grandchildren; 3 great grandchildren; siblings Mildred “Mick” Graeve of Earling, IA; Joanne Kohles of Earling, IA; sister-in-law Mary Erlbacher and Pam Erlbacher. Memorials can be made in memory of Bill to Birthright of Council Bluffs, Priest For Life or St. Joseph’s Catholic Church in Earling, Iowa.

William John Erlbacher was born on November 24,1938 on the family farm three miles north of Earling, he was the youngest of six children of Leonard and Valeria. Bill attended St. Joseph's Catholic School where he enjoyed playing basketball... View Obituary & Service Information

The family of William John Erlbacher created this Life Tributes page to make it easy to share your memories.

William John Erlbacher was born on November 24,1938 on the family...

Send flowers to the Erlbacher family.