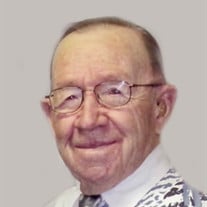 Wilber Lynn Hubbard was born August 9, 1919, on the family farm near Weston, Iowa, the son of Wilber F. and Vera (Hamilton) Hubbard. When the family moved to their Neola, Iowa farm, Wilber started his education at the Neola public school. He graduated from Neola High School in May 1937. After graduation, Wilber helped his father with his farm and farm insurance business until he enlisted with the U.S. Army in September 1942. Wilber served in the Pacific theatre during World War II, as a member of the 7th Division, 57th Field Artillery Battalion. He was honorably discharged in December 1945 with the rank of Technician V. Upon his return home, Wilber assisted his father with his insurance business. This is when he met the love of his life, Ioma Krueger of Walnut, Iowa. Ioma was working for the Pottawattamie County Mutual Insurance Agency at the time. Wilber started his farming operation in 1948. On September 18, 1949, Wilber and Ioma were married at the Peace United Church of Christ in Walnut, Iowa. They were blessed with the birth of four sons, Neal, Clark, Alan and Mark during their life together. Wilber and Ioma operated two different farms in the Neola area until 1966 when they moved their farming operation to Lincoln Township, south of Walnut. During his farming career, Wilber raised crops, cattle, hogs, sheep and laying hens. He retired in 1988. One of his proudest accomplishments in his retirement years was receiving an Izaak Walton League award for the windbreaks they established on the farm. Wilber and Ioma lived on their farm until 2008, when they moved to Peace Haven Retirement Center in Walnut. They were active residents at Peace Haven until health issues caused them to move to Northcrest Living Center in 2017. Ioma died in May 2017. They had been life partners in nearly everything for 70 years. Wilber was a lifelong resident of Pottawattamie County. He never had a desire to live anywhere else despite his dislike of Iowa winters. His favorite location, other than Iowa, was the mountains of Colorado. He and Ioma traveled considerably during their retirement years, but they never wanted to be away from the farm for more than two weeks at a time. Wilber was an active member of Masonic Lodges for 77 years; a member of the Order of the Eastern Star; he taught Sunday School and served as secretary to the congregation at the Neola Presbyterian Church in his early years; he served on the church council at Peace United Church of Christ in Walnut; and served on the Lincoln Township Trustees. He was a charter member of the Walnut Genealogy Society and donated over 1000 hours as a volunteer at Jennie Edmundson Hospital. Music and dancing were a major part of Wilber's life through his mother's early encouragement. He played the clarinet in high school, sang in church and community choirs into his early 80's, and played the harmonica (for anyone who would listen). He sang for several weddings and funerals in the 1950's and 1960's. Wilber loved dancing to big band orchestras in his early years and square dancing in later years. He enjoyed family and neighborhood gatherings, and playing cards (pitch, pinochle and cribbage). He liked to visit and trade stories with whomever he was with at the moment. Wilber had a reputation of treating those he met with old-fashioned charm and grace. Rarely a cross word to or about anyone. Wilber died on Saturday, April 25, 2020 at Northcrest Living Center in Council Bluffs, having attained the age of one hundred years, eight months and sixteen days. In addition to Ioma, he was preceded in death by his sons, Clark and Mark Hubbard. He was also preceded in death by his brothers Joseph and Neal, his sister Verna, and parents Wilber F. and Vera Hubbard. Wilber is survived by sons Neal Hubbard and his wife Charlotte of Lilydale, MN; and Alan Hubbard and his wife Lisa of Cedar Falls, IA; daughter-in-law Paula Hubbard of South Bend, IN; grandchildren Shawna Hubbard of Indianapolis IN; Kirk Hubbard and his wife Kate of Golden, CO and Anna Hubbard of Chicago IL; nieces and nephews. Memorials in remembrance of Wilber can be made to the Walnut Community Fire Department, Walnut, Iowa.

Wilber Lynn Hubbard was born August 9, 1919, on the family farm near Weston, Iowa, the son of Wilber F. and Vera (Hamilton) Hubbard. When the family moved to their Neola, Iowa farm, Wilber started his education at the Neola public school. He... View Obituary & Service Information

The family of Wilber Lynn Hubbard created this Life Tributes page to make it easy to share your memories.

Send flowers to the Hubbard family.