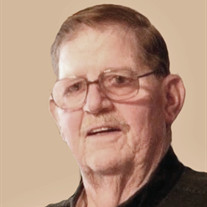 Ward Alan Koos, son of Orvy and Margaret (Albers) Koos, was born on November 27, 1945 in Harlan, Iowa. He was the youngest of three brothers. Ward was born and raised in Walnut, Iowa where he was baptized and confirmed at Peace United Church of Christ. He then attended Calvary Baptist Church with his family after marrying Connie. He graduated from Walnut High School with the class of 1963. He attended Iowa State University for a semester but came back to Walnut to help farm, when his father needed him, and marry his high school sweetheart, Connie Petersen on April 11, 1965 at her family farm. To this union two daughters were born: Sandra and Julie. Ward began farming as a young kid with his family. He continued this career throughout his life. He had many hobbies that included: fishing, hunting, trapshooting, camping and taking his family boating to enjoy water activities. There were many summers spent in Canada fishing with his family. In true farmer fashion, he enjoyed the opportunity to show off his restored tractors in many tractor rides and parades. He enjoyed having coffee with his friends and playing cards, especially the rivalry with his good friend, Bob. Ward loved playing and watching sports of all kinds. He was especially proud to watch his children and grandchildren participate in their activities. Most of all, Ward loved spending time with his family. Ward passed peacefully on Friday, April 10, 2020 at Myrtue Medical Center having attained the age of seventy-four years, four months and fourteen days. He was preceded in death by his parents and brother Larry. Left to cherish his memory are his loving wife of fifty-five years Connie Koos of Walnut, Iowa; daughters Sandra (Duane) Holtz of Avoca, Iowa; Julie (Bob) Klein of Harlan, Iowa; grandchildren Tyler Holtz of Avoca, Iowa; Eric (Lydia) Holtz of Walnut, Iowa; Nic Klein of Des Moines, Iowa; Haley Klein of Harlan, Iowa; brother Wayne (Norma) Koos of Boone, Iowa; sister-in-law Betty Koos of Twin Lakes, Iowa; nieces and nephews, other family and many friends.

Ward Alan Koos, son of Orvy and Margaret (Albers) Koos, was born on November 27, 1945 in Harlan, Iowa. He was the youngest of three brothers. Ward was born and raised in Walnut, Iowa where he was baptized and confirmed at Peace United Church... View Obituary & Service Information

The family of Ward Alan Koos created this Life Tributes page to make it easy to share your memories.

Send flowers to the Koos family.