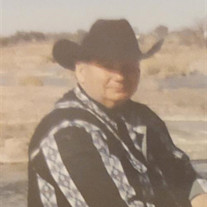 Walter “Walt” Allen Knudtson, was born on August 31, 1943 to Woodrow and Lola (Dorscher) Knudtson in Minot, North Dakota. He was one of four brothers. His grew up in North Dakota and shortly after his father died in 1950, the family moved to Walnut. He graduated with the Class of 1961 from Walnut High School. After graduation he enlisted in the United States Army. He went overseas to France and Germany and worked with combat engineers. On November 18, 2000, he was united into marriage to Beverly Wendt in Walnut, Iowa. He started working at Volkswagen, then drove a road grader for the county, farmed, operated heavy equipment, grain trucks and other various jobs. He loved to ride horses and fish. He was a tinker in the garage and loved to travel as long as he had his horse Patsy along side him. He was an avid watcher of western movies and anything on TV. He put ketchup on everything and enjoyed his coffee and donut mornings with the Kruegers. Walt entered into rest on Friday, November 27, 2020 at the Veteran’s Medical Center in Omaha, having attained the age of seventy-seven years, two months and twenty-seven days. He was preceded in death by his parents and brothers Vernon, Glen and Dale. Left to cherish his memory are his wife Beverly Knudtson of Walnut, Iowa; daughter Vickie Knudtson of Walnut, Iowa; step daughters Shalee Hansen of Council Bluffs, Iowa; Aubrey (Jeff) Styles of Gretna, Nebraska; Angie (Chris) Turner of Griswold, Iowa; April (Rory) Miller of Walnut, Iowa; Amy (Tom) Carroll of Walnut, Iowa; grandchildren Josie Cable of Walnut, Iowa; Drew Cable of Council Bluffs, Iowa; Matthew Weihs of Walnut, Iowa; great grandson Daxen Cable of Council Bluffs, Iowa; aunts Mable Jacobsen of Avoca, Iowa; Mrs. LaVonne Woods of Oregon; horse Patsy; granddogs Dory and Minkus; other family and many friends.

Walter &#8220;Walt&#8221; Allen Knudtson, was born on August 31, 1943 to Woodrow and Lola (Dorscher) Knudtson in Minot, North Dakota. He was one of four brothers. His grew up in North Dakota and shortly after his father died in 1950, the family... View Obituary & Service Information

Memorial Service will be broadcasted Live

Send flowers to the Knudtson family.