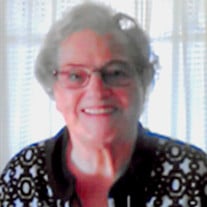 Vonda Schories Koch was born on April 5, 1929 on a farm in Harrison County to her parents, Gustav and Bertha (Ronfeldt) Schories. She was the fourth of eight children. She attended country school by Portsmouth, Iowa and graduated from Tennant High School in Tennant, Iowa in 1947. In her Junior and Senior years, Vonda played on the basketball team. After graduation, Vonda was a live in housekeeper for Dr. Patterson, the Veterinarian in Minden, Iowa. It was while working for Dr. Patterson that Vonda met John Koch. They were married on August 20, 1950 at the Minden Congregational Church. They started their married life on John’s family farm, south of Neola, Iowa. There they raised three children, one daughter Sheila, and 2 sons, Robert and Timothy. Vonda was a homemaker and helped John with every aspect of farming for the first 20 years of marriage. Then she took a job as a cook at the County Home in McClelland, Iowa for seven and half years. In August of 1978, Vonda opened her own cafe in Neola. Over the years she went on to work at several restaurants. In 1994 she started working at Oriental Trading Company and then retired in 1999. Vonda was a member of the Minden United Church of Christ, Go Getters, and Friendly Links. She also spent many years on various church committees. She was also named Farm Bureau Woman of Year. Vonda passed away on Saturday, August 17, 2019 at Myrtue Medical Center in Harlan, Iowa, attaining the age of ninety years, four months, and twelve days. She was preceded in death by her husband John Koch, parents, brothers Alfred, Alvin and Alton, sisters Irene Potter and Jean Young. To mourn her loss are Sheila (Chris) Pedersen, Robert (Cindy) Koch; Timothy (Doreen) Koch; 2 grandchildren, Nancy (Craig) Lantz, Brenda Henry; 3 step grandchildren, John (Wendy) Hansen, Clint (Danielle) Hansen, Andrea Hansen; 4 great grandchildren; 4 step great grandchildren; sisters Betty Irlbeck of Arizona; JoAnn Chapman of Illinois; nieces and nephews, other relatives and friends.

Vonda Schories Koch was born on April 5, 1929 on a farm in Harrison County to her parents, Gustav and Bertha (Ronfeldt) Schories. She was the fourth of eight children. She attended country school by Portsmouth, Iowa and graduated from Tennant... View Obituary & Service Information

The family of Vonda Lorraine Koch created this Life Tributes page to make it easy to share your memories.

Send flowers to the Koch family.