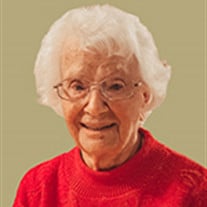 Viola McCullough, the youngest of seven children of Harry and Elsie (Turpin) Duskin, was born on January 25, 1920 north of Atlantic, Iowa in Pymosa Township. While growing up her siblings called her Sis. She started her education at a rural country school and then attended Atlantic High School where she graduated with the class of 1938. In high school, she was nicknamed Vi and for the rest of her days she was known as Sis, Vi, or Aunt Sis. On January 28, 1939, Vi was united in marriage to Gerald “Shorty” McCullough at the Little Brown Church in Nashua, Iowa. They started farming northwest of Griswold, Iowa. In 1945, they bought a farm east of Griswold where they lived until retiring to town in 1984. In December of 1948, Vi received her most treasured Christmas gift when they adopted their son Dennis. Vi was a member of the Griswold Methodist Church where she was active with the United Methodist Women. Vi also enjoyed time spent with the Home Builder Class and quilting group where she made many quilts for others and each of her grandchildren and great grandchildren. Vi made her first quilt at the age of 12 (sun bonnet girl) and the last one at the age of 90. She was a member of the Griswold Rebekah Lodge #480 and Past Noble Grands for over 60 years. Vi and Shorty loved camping and fishing. They spent several winters in Texas. Vi also loved crocheting and knitting. She also made many afghans, pot scrubbers, and loads of stocking hats for the mitten tree at church. Vi died peacefully on Thursday, January 6, 2022 at Cass County Memorial Hospital in Atlantic, attaining the age of one hundred and one years, eleven months, and twelve days. She was preceded in death by her parents, 4 brothers, 2 sisters and her husband in 1992. She is survived by her son Denny McCullough of Griswold, Iowa; grandchildren Michael McCullough of Adel, Iowa; Tony McCullough (Hollie Reilly) of Atlantic, Iowa; Anna Hoegh (Michael Jones) of Harlan, Iowa; great grandchildren Payten Hoegh, Baylee Hoegh, Cierra Hoegh, Amaurie McCullough, as well as many nieces and nephews.

Viola McCullough, the youngest of seven children of Harry and Elsie (Turpin) Duskin, was born on January 25, 1920 north of Atlantic, Iowa in Pymosa Township. While growing up her siblings called her Sis. She started her education at a rural... View Obituary & Service Information

The family of Viola D. McCullough created this Life Tributes page to make it easy to share your memories.

Viola McCullough, the youngest of seven children of Harry and...

Send flowers to the McCullough family.