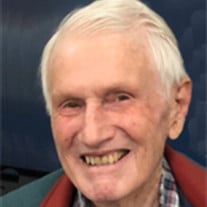 Vernon Joseph Miller, son of Frank J. And Isabel (Weihs) Miller, was born March 7, 1934 in Buck Grove, Iowa. He was baptized and confirmed at St. Peter’s Catholic Church in Defiance, Iowa, where he remained a lifelong member. He attended St. Paul’s Catholic Church in Defiance, where he graduated with the class of 1951. Shortly after graduating high school, Vern worked in Omaha at Wilson Packing Company. He returned to Shelby County where he met and married Mary Eckermann. Vern was drafted into the Army in 1956, serving at Fort Bliss, Texas for 2 years. Upon his and Mary's return to Shelby County, settling in Defiance, Vern began driving a tank wagon with Standard Oil Co. He would go on to own and operate a bulk/wagon franchise of Standard Oil, eventually moving to Irwin. Vern developed several lasting friendships in the counties he served with bulk oil. He and Mary managed the business until his retirement in the mid-nineties. He is fondly remembered by hundreds of students and families in the IKM-Manning school district, having driven the school bus for 52 years, both rural routes and sport events. Vern was a passionate supporter of the IKM schools, even when not driving the school bus for an event - either working chains at a football game, or in attendance cheering on the high school students. Vern was called by God to support young Catholics in their confirmation years, working with the Dioceses of Des Moines Teens Encounter Christ (TEC) program in Panora, Iowa, serving as a lay spiritual leader. Vern loved sports! It was a love that never ended – and for decades Vern could be found attending local sporting events, greeting all with an enthusiastic smile. He cultivated that love not only from the sports in which he participated, but also the sports teams in which his kids, grandkids, nieces and nephews, and local talent were involved. Along with his brothers, Vern played baseball with the Defiance Town Team (he was an ace shortstop in the 60’s). He’d then go on to coach and manage both baseball and basketball locally. Those who played with him or were coached, knew him as “Koozie” or “Kooz”. After his coaching and playing days were finished, he’d still be found cheering on local sport teams – enjoying it, with a pen in hand, jotting down stats and score. A local sports announcer referred to Vern as the “Official’s Official”. In the early 80's, Vern started cycling, which began a 25-year relationship with a local RAGBRAI club, the Huffn- Puffers. He and Mary built lifelong friendships with countless club members and other RAGRBAI enthusiasts over those years. It is amazing to look back at all the lives Vern has touched over the years, as he had a knack for finding a way to connect with anyone - be it through faith, sports, gardening, business, lawn care, or crossword puzzles – or just a simple, genuine “hello”. No lives had he touched more deeply, or influenced more, than those of his family. His children, grandchildren, and great grandchildren were the source of immeasurable pride and joy in Vern's and Mary's hearts. And in return, his grandchildren, would race to show Grandpa Vernie their latest accomplishments – to hear him extend his praise and that unforgettable smile. Vern’s retirement from Standard Oil gave him more time to watch his grandchildren attend high school and college, and enlist in the Army National Guard, as his schedule filled with games, concerts, graduations, promotion ceremonies, careers, and eventually weddings and birth of great grandchildren. Vern’s was a life lived to the fullest, by a man loved by all. Vern died on Tuesday, March 2, 2021 at Bergan Mercy Hospital in Omaha, Nebraska, attaining the age of eighty-six years, eleven months, and twenty-three days. In addition to his parents, he was preceded in death by his siblings Norma (Tony) Bueltel, Mark (Pat) Miller, and sister-in-law Anne Miller. He is survived by his wife of 64 years Mary Miller of Irwin, Iowa; children Michael Miller of Carroll, Iowa; Julie Johnson of Bedford, Texas; Richard Miller of Lincoln, Nebraska; Joan (Jerald) Bieker of Defiance, Iowa; Jean (Gary) Muhlbauer of Defiance, Iowa; Ronald (Jill) Miller of Corinth, Texas; 16 grandchildren; 22 great grandchildren; siblings Don (Alice) Miller of Defiance, Iowa; Duane (Sue) Miller of Denison, Iowa; Larry Miller of Zephyr Hills, Florida; Mary (Joe) Gross of Donahue, Iowa; many nieces and nephews; other family members and many friends.

Vernon Joseph Miller, son of Frank J. And Isabel (Weihs) Miller, was born March 7, 1934 in Buck Grove, Iowa. He was baptized and confirmed at St. Peter&#8217;s Catholic Church in Defiance, Iowa, where he remained a lifelong member. He attended... View Obituary & Service Information

The family of Vernie Joseph Miller created this Life Tributes page to make it easy to share your memories.