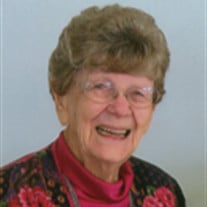 Verlee Shupe, long-time resident of Harlan, went home to be with her Lord Wednesday, September 18. She was born on January 15, 1919 into one of the founding families of the Danish Baptist community near Fiscus. Her father was Magnus Jensen; her mother was Martha Nelsen, the only daughter of Jeppe and Else Nelsen. Verlee too was an only daughter, with brothers Dale, Wayne, Howard, and Harvey. The boys were allowed to finish high school; she was not, instead helping to raise her younger brothers and then working on nearby farms to raise other children. At 19, she met Harold Shupe, a 24-year-old barber at a Baptist youth conference in northeast Iowa. They were married September 4, 1938 at one of the first weddings at what was then the new building for the Merrill's Grove Baptist Church. They first lived in Cedar Falls, Garner and Forest City, during which time Karen and Rosalie were born. When Harold entered the U.S. Navy at the end of 1943, Verlee and her two young daughters moved to Harlan to be near her parents. After the war, Harold joined her in Harlan, and a third child, David, was born. For the next two decades Verlee raised her family and actively participated in Bethel Baptist Church. At the age of 50, she earned her GED. She also had a lifelong commitment to reading and memorizing Scripture, and from that she developed her own mission: hand-making verse packs for Scripture memorization for various Christian ministries, including the Navigators. Over 7 decades she made over 60,000 verse packs, which were sent across the nation and the world. Because of the verse packs, she corresponded with and prayed for other Christians across the world. She was still making them when she was 99 years old and living in Elmcrest Assisted Living. Until the day before her death, she sewed her own clothes, had an active mind, and was a gregarious person far different from the shy farm girl of Fiscus. Verlee was preceded in death by her husband Harold (2003) and their daughter Rosalie (2017). Surviving her are Karen (Larry) Wells of Jefferson, Oregon; son-in-law Paul (Rosalie) Powers, David (Della) Shupe of Saint Paul, Minnesota; four grandchildren, six great-grandchildren and three great- great grandchildren.

Verlee Shupe, long-time resident of Harlan, went home to be with her Lord Wednesday, September 18. She was born on January 15, 1919 into one of the founding families of the Danish Baptist community near Fiscus. Her father was Magnus Jensen;... View Obituary & Service Information

The family of Verlee Shupe created this Life Tributes page to make it easy to share your memories.

Verlee Shupe, long-time resident of Harlan, went home to be with...

Send flowers to the Shupe family.