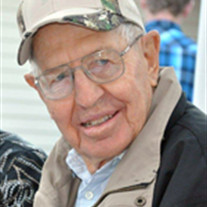 Verl Edwin Arentson was born on February 10th, 1928 to Eddie and Alice (Petersen) Arentson in Harlan, Iowa along with his twin brother, Gene. He attended school at Lincoln #4 Country School through eighth grade, then graduated from Harlan High School in 1945. He placed his faith in Christ at age 10 during Vacation Bible School and was baptized at Bethel Baptist Church in Harlan. He farmed with his brother and father until he was drafted into the Army on March 22nd, 1951. He served in the 44th Ordinance Depot Company in Korea and was discharged on December 22nd, 1952. He met Marie Steenbock at the Twin Club in Omaha, Nebraska and they were married on January 30, 1954. They rented farms near Persia and Harlan, and in the spring of 1965 bought a farm near Harlan. Verl and Marie had five children: Connie, Lois, Larry, Emory, and James. After moving to Harlan, they became members of First Baptist Church where Verl served in various positions. He was a board member of Shelby County Farmer's Mutual Insurance for 27 years. He served on the Extension Council, was a 4-H leader, a Lincoln Township Trustee, and was a member of Shelby County Pork Producers. He was inducted into the Shelby County Hall of Fame at the Shelby County Fair in 2010 and was awarded Honorary Lifetime Member of the Shelby County Historical Society. When Verl retired from farming in 1985, Verl and Marie moved to Harlan and Verl went to work for the Farm Service Coop until 1995. He worked part time managing a car wash for the next 18 years. Verl and Marie enjoyed traveling and visited all 50 states. Verl often spent time in his shop doing woodworking and tinkering on various projects. He loved making things for his kids, grandkids and friends. In October 2018, Verl and Marie sold their home in Harlan and moved to an apartment at the Elm Crest Independent Retirement Community. Verl's legacy is that his life revolved around his family, faith and the farm. He was a devoted, loving, and selfless husband, father, grandfather and great grandfather. Through his strong commitment to his family and to God, his family all knew that he loved them unconditionally and wanted what was best for them. He was truly a kind and gentle soul. He would often say, in reference to his many children, grandchildren, and great grandchildren - "Just look at what we've started!" He is survived by his wife, Marie of 66 years; Children: Connie (David) Stilley of Clive, IA; Lois (Dallas) McDermott of Johnston, IA; Larry (Pam) Arentson of Redwood Falls, MN; and Emory (Shellie) Arentson of Boone, IA; twin brother Gene (Darlene) Arentson of Harlan; sister Mary Nichols Olson of Marshalltown, IA; brother in law Stanley Christensen of Harlan; and sister in law Vivienne Steenbock of Coos Bay, Oregon; 18 grandchildren: Cara (Scott) Blum, Joshua (Julie) Stilley, Jordan (Shawna) Stilley, Luke Stilley, Erin (Jason) Gaul, Ryan McDermott, Matt (Katie) McDermott, Wesley (Sarah) Arentson, Brandon (Heather) Arentson, Jared Arentson, Hannah (Scott) Kratzer, Megan (Zach) Sloter, Titus (Carolyn) Arentson, Esther (Caleb) McKim, James (Alicia) Arentson, Silas Arentson, Mary Arentson, Ezra Arentson and 31 great grandchildren. He was preceded in death by son James, infant grandson, Caleb Stilley, sister Joyce Christensen, and brothers in law Dick Nichols and Wayne Olson. Visitation will be at the Pauley-Jones Funeral Home in Harlan from 5:00 to 7:00 on Sunday evening, August 16th. The Funeral Service will be held at the First Baptist Church in Harlan at 11:00 am on Monday, August 17th with a lunch following. Burial will be at the Harlan Cemetery at 2:00 pm. Memorials are suggested to the First Baptist Church of Harlan.

Verl Edwin Arentson was born on February 10th, 1928 to Eddie and Alice (Petersen) Arentson in Harlan, Iowa along with his twin brother, Gene. He attended school at Lincoln #4 Country School through eighth grade, then graduated from Harlan High... View Obituary & Service Information

The family of Verl Arentson created this Life Tributes page to make it easy to share your memories.

Send flowers to the Arentson family.