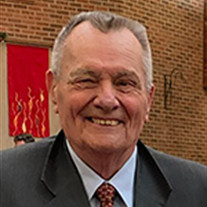 Vern Gary Olsen (Gary) was born at home in Marquette, Nebraska on August 24, 1937. He was the second child of Fred and Ruby Olsen. His older brother, Fredrick, Jr., died shortly after birth. His childhood adventures in Central City with his younger brother, Ron, shaped his life. It was a life full of family and peppered with the unique flair Gary brought to all he encountered. A lifelong Nebraska boy, Gary loved football and especially the Nebraska Cornhuskers. He scored his first, and only touchdown, in Fullerton, Nebraska. This is a fact known to all who traveled through the small Nebraska town with him. Surprisingly, there is no statue or sign commemorating the occasion. He continued playing football through High School in Central City. He even attempted to become a walk on at the University of Nebraska, but that career ended abruptly when he realized the workouts were not to his liking. With his football days behind him, he joined Sigma NU fraternity and enjoyed every minute of failing out of the University of Nebraska's engineering school. His school days weren't over. After a series of jobs in California and two years in the Army (he was all suited up and ready for the Bay of Pigs invasion, but it never happened, thankfully!), he returned to the University of Nebraska and earned a bachelor's degree in Business Administration. He then moved to Omaha and put that degree to use working in the insurance and banking industries. He also joined the Omaha Sports Club, a move which would come to change his life forever. It was through the Omaha Sports Club that he met a beautiful young Gretchen Kilibarda. On one skiing trip in Colorado, there was a dance, and their love story began. They were engaged on the way home from Aspen. This is the beginning of Gary's saga of thoughtful gifts to Gretchen. The first was a pair of shoelaces. At least these shoelaces were attached to an engagement ring. It only gets better from there. It is not so surprising for a wife to get a vacuum for her birthday. But a 560 International tractor? Or a Ruger pistol? His skill in choosing the perfect gift pails only in comparison to his ability to get a deal while doing it. Gary and Gretchen were joined in Holy Matrimony on May 27, 1967 at St James Catholic Church in Omaha. They lived in several apartments throughout Omaha. Just as Gary was beginning his MBA program at the University of Nebraska. Their first child, Eric Stephen was born February 6, 1969. Later that year, Gary would wake Eric in the middle of the night to make sure he witnessed the first man on the moon in July. A year later, Nicole Marie was born on February 16, 1970. Soon after, they moved to their first home before the birth of their third child, Lisa Anne on November 18, 1971. Along with the new home, Gary also purchased a new vehicle. Thus begins the legend of the Red Scout. The red scout could go anywhere, so we are told. We do know it can go through snow…but not quite 12 inches of snow. It can drive, all by itself…until it hits a tree. It can haul a pregnant Gretchen to and from the hardware store over and over again getting supplies to finish the basement in the hottest September on record…without air conditioning and with black vinyl seats. It could haul a family of 8 on fishing trips, to baseball games and to and from all of life's adventures. And you can bet, Gary got a deal on it…with a little haggling of course. Three more children were born while in their home in Omaha. Monica Lynn on February 8, 1973, Paul Frederick on September 16, 1974(after the above-mentioned week of 110 degree heat), and David Patrick on April 19, 1976. At this point, they realized they needed a little more room and found a piece of paradise outside of Fort Calhoun, Nebraska to begin building their dream home. They moved in February 1978. This also began Gary's career in Real Estate and The Maxwell Olsen Land Company. Gary's children will always remember their football Saturday routine for home Husker games. Getting to Lincoln early, making it to the Union to see the band, touring through Morrill Hall, getting to the stadium right as it opened and cheering on the Huskers…at least until 2004. Always quick to share his wit or point out street signs, short cuts or the "right way" to do things, he would drive across town to get the lowest gas prices, live bait was cheating, he could somehow tell you everything you never needed to know about beavers. When they finally paved the road, he took the county to task until everyone was paid for the land to the center of the road. In his later years, "The Falcon of Fort Calhoun," as he would come to be known, enjoyed his fishing trip to Canada with his sons, playing cards with Gretchen and their friends, golfing and still trying to get a deal. But perhaps his greatest joy was spending time with his 17 grandchildren. His gift giving did improve over the years even though there was only one person he would buy gifts for. Life will be less colorful without his wisdom and insight.

Vern Gary Olsen (Gary) was born at home in Marquette, Nebraska on August 24, 1937. He was the second child of Fred and Ruby Olsen. His older brother, Fredrick, Jr., died shortly after birth. His childhood adventures in Central City with... View Obituary & Service Information

The family of V. Gary Olsen created this Life Tributes page to make it easy to share your memories.

Send flowers to the Olsen family.