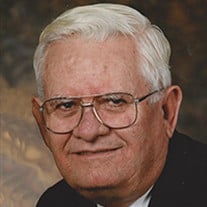 Urban George Schneider son of Michael and Catherine (Blum) Schneider was born on January 5, 1928 in Westphalia, Iowa. He was one of 7 children. Urban attended St. Boniface School in Westphalia. He was active in baseball and assisted on the family farm. He was inducted in the baseball hall of fame in Westphalia. On December 27, 1950 he married Joan Loehr and they celebrated their 71st anniversary this past December. Urban was drafted by the army and was shipped overseas where he trained near Mt. Fuji in Japan and served in the Korean War. After returning from the war, Urban and Joan farmed locally before purchasing his boyhood family farm in 1960. In addition to farming, Urban was a truck driver as well as a school bus driver for the Harlan Community school district for many years. Urban and Joan were longtime members of St. Boniface Parish and Urban was a member of the Knights of Columbus. Urban and Joan raised 5 sons and lived in rural Westphalia until 2016 when they moved to the Elm Crest Apartments in Harlan, IA. Urban lived 78 years of his life at his family farm in rural Westphalia. Urban passed away on June 7, 2022 attaining the age of 94 years, 5 months, 2 days. He was proceeded in death by his son Ronald and his parents Michael and Catherine; Brothers Ambrose (Bud), Jim and his wife Joan; and two sisters Rita and her husband Frank Reisz, Ella Mae and her husband Ray Gross and sister-in-law Violet Schneider. He is survived by his wife Joan, his sons Robert and his wife Sandy of Omaha, NE, David of Lincoln, NE, Gary and his wife Sharon of Ham Lake, MN; Phil and his wife Mary of Lenexa, KS; his brother Don of Colorado Springs, CO and his sister Arlene and her husband Merlin Carter of Manning, IA; 17 grandchildren, and 31 great grandchildren, and 2 great-great grandchildren.

Urban George Schneider son of Michael and Catherine (Blum) Schneider was born on January 5, 1928 in Westphalia, Iowa. He was one of 7 children. Urban attended St. Boniface School in Westphalia. He was active in baseball and assisted on the... View Obituary & Service Information

The family of Urban G. Schneider created this Life Tributes page to make it easy to share your memories.

Send flowers to the Schneider family.