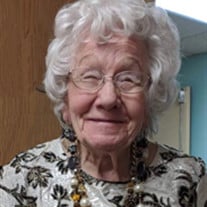 Unis Fae Schumacher, daughter of Earl Albert and Ruby Berniece (Dowling) Greer, was born December 13, 1924 in Wagner, South Dakota. She was a twin, one of two sets of twins born to her parents in 1924, which were 10 months and 4 days apart. She attended school in Rosebud, South Dakota and later in Manilla, Iowa. On June 6, 1949, Unis was united in marriage to Melvin Edward Schumacher. Six children were born to this union Tom, Galen, Berniece, Chuck, Steve, and Mae. She had unconditional love for her children. Unis was a strong, hardworking and determined woman with a great sense of humor. She was an excellent baker, known for her cinnamon rolls, coconut cream pies, and angel food cakes. She loved dressing up, especially wearing jewelry and always looking nice. She also loved square dancing and social dancing, particularly the polka and the waltz. She loved her friends and being with people. She was an inspiration, always trying to do what she could to stay in shape or to recover from any health challenge. She had a sweet tooth, and especially liked ice cream. In her later years, she enjoyed playing Skip-Bo and being a member of the Red Hat Society. She was a member of St. Michael's Catholic Church in Harlan. Unis had hoped to retire from cleaning houses at the age of 90, but she ended up retiring at 88, when she broke her hip. In June, 2017 she moved to Elm Crest Retirement Community, where she passed away on Saturday, September 21, 2019, attaining the age of ninety-four years, nine months and eight days. In addition to her parents she was preceded in death by her son Tom Schumacher, siblings Elaine Greer, Merle Greer, Inis Dickes, Eugene Greer, Velda Miller, Wilma Dickes, and Arthur Greer. She is survived by her children Galen (Barb) Schumacher of Huntington Beach, California; Berniece (Russell) O'Neill of Two Mountains, Quebec; Chuck (Coleen) Schumacher of Shelby, Iowa; Steve (Katie) Schumacher of Blountville, Tennessee; Mae (Brad) Svendsen of Loveland, Colorado; daughter-in-law Linda Schumacher of Avoca, Iowa; former daughter-in-law Kathy Schumacher of Shelby, Iowa; 19 grandchildren; 26 great grandchildren; brother Verle Greer of Harlan, Iowa; nieces and nephews; other family members and many friends.

Unis Fae Schumacher, daughter of Earl Albert and Ruby Berniece (Dowling) Greer, was born December 13, 1924 in Wagner, South Dakota. She was a twin, one of two sets of twins born to her parents in 1924, which were 10 months and 4 days apart.... View Obituary & Service Information

The family of Unis Fae Schumacher created this Life Tributes page to make it easy to share your memories.

Send flowers to the Schumacher family.