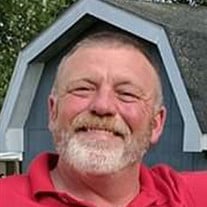 Troy Alan Walker, the son of Nancy Kelly and Elmer Walker was born on August 31, 1968 in Council Bluffs, Iowa. He grew up in the Hancock/Oakland areas. He loved being on his grandma and grandpa Piittmann’s farm near Hancock where he developed his love of farming and raising animals. He started farming with his grandpa as a young boy and continued to farm until the farm was sold. He also raised cattle which was his passion, he loved cows! Troy was baptized and confirmed in the Trinity Lutheran Church in Avoca in 1984. He was also a Boy Scout achieving the level of Life. Troy graduated from Avo-Ha High School in 1987 and entered the Air Force stationed in North Dakota for 1 year before returning to Hancock. Shortly after he moved to Omaha where he met Nikki DeMoss, they were married in 2003 and had 1 daughter, Roxie Jane, who he loved with all his heart. She continues to make him proud everyday. After leaving Omaha, Troy drove truck for several years. Eventually he settled into agronomy and began managing Coops making life long friends along the way. Troy enjoyed camping and fishing, taking any opportunity to be on the water. He also loved people, never knowing a stranger. He married Richele Guyer in 2008 and she shared in his love of camping and fishing. They spent many happy days on the lake. When Troy was 19 he moved down to Kansas to be closer to his Dad and siblings. They became very close spending many happy crazy times together. On January 3, 2020, Troy passed away after a fierce 16 month battle with Glioblastoma Multiform. Waiting for him in Heaven were his beloved grandparents, his infant daughter Ella Rose, and his brother Tony Walker. Those left to cherish his memories are his wife Richele Walker of Algona, Iowa; his children Roxie Walker of Ponca, Nebraska; Nelson Guyer of Harlan, Iowa; Karli Guyer (Andrew Sampson) of Vinton, Iowa; mother Nancy Kelly of Avoca, Iowa; father Elmer (Pat) Walker of Galena, Kansas; siblings Londa (Tom) Sofia of Joplin, MO; Gayla (Les) Woodcock of Galena, Kansas; Robin (Donnie) Frazier of Carthage, MO; uncle Randy Piittmann of Atlantic, Iowa; nieces and nephews, cousins and so many, many friends.

Troy Alan Walker, the son of Nancy Kelly and Elmer Walker was born on August 31, 1968 in Council Bluffs, Iowa. He grew up in the Hancock/Oakland areas. He loved being on his grandma and grandpa Piittmann&#8217;s farm near Hancock where he... View Obituary & Service Information

The family of Troy Alan Walker created this Life Tributes page to make it easy to share your memories.

Troy Alan Walker, the son of Nancy Kelly and Elmer Walker was...