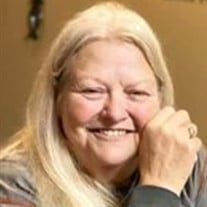 Tracy Lyn Shimer Tracy Lyn (Berry) Shimer, daughter of Imogene “Jeanie” Mary Watts and Frank Edwards Keith Berry, Stepfather D.C. “Dud” Watts. She was born April 24, 1957, in Creston, IA She graduated from Creston High School in 1975. Tracy grew up o a farm just outside of Creston and participated in the rodeo when she was younger. She worked as a bartender at her mother’s bar “The Double Nickle” for many years while raising her daughter Kori. On August 26, 1988, she married Robert “Willy” Lee Shimer and then moved to Fort Polk Louisiana and lived there for 4 years, while Robert served in the US army. Rob and Tracy then had their son Devon while stationed at Fort Polk. While living in Louisiana Tracy had a part time job at the flea market. In 1992 they moved back to Avoca Iowa and lived there for 23 years, during that time Tracy was mostly a stay-at-home mom but worked part time jobs at The Heritage, Wings America and Dollar General. In 2015 Rob and Tracy bought a house in Harlan. Tracy was a very warm-hearted person and was loved by many, she was always willing to go above and beyond for others. She was a loving Mother and Grandmother to her family and even those who were not. Her passion was spending time with her grandkids but when they weren’t around, she kept busy working on vinyl projects. She loved sewing and crocheting and making things like blankets and dolls. She enjoyed motorcycle rides with her husband and going to the races when her husband Rob raced. Every summer she would keep busy by entertaining the grandkids and spent many days at the pool with them. She enjoyed going to school events for the grandkids and always was there for her children. Tracy got to enjoy her life by getting to travel to new places when she would visit her daughter Kori in South Carolina, Germany, Tennessee. She enjoyed visiting family and friends in Illinois, Missouri, and Texas. When she was younger, she was able to travel to Colorado. Tracy and Rob also traveled to many places like South Dakota and got to enjoy seeing Mount Rushmore, going to Sturgis, and Devils Tower in Wyoming. She visited Oklahoma, Minnesota to the Mall of America and Kentucky to the Kentucky Derby. Tracy was always good about keeping in touch with friends and family and felt that family was very important and wanted to always be involved in their lives. She enjoyed reaching out to old friends and staying in touch with as many people as she could. If she knew you, she always made sure to say hi and stop to have a conversation with you. Survivors include her husband Robert Shimer; three children: two daughters Kori Henning of Harlan and Angela Jenkins (Fiancé Clay Nelson) of Lenox and one son Devon Shimer (wife Amanda) of Fremont, NE; eleven grandkids, Dylan Hargens (wife Makayla), Anyston Henning, Nathan Shimer, Henry Shimer, Cedric Nelson, Cassidy Nelson, Colby Nelson, Trenidy Shimer, Dawson Jenkins, Kaylee Jenkins and Brenna Nelson; Two brothers Gordy Berry of Murray, IA, Kirby Berry (wife Rhonda of Creston, one sister Kathy Allen (husband Scott) nieces Tressa Kline, Daniella Treacy, Kirsten Edwards, Kelsey Reese (husband Keenan) nephew Seth Allen. Tracy was preceded in death by her parents and brother Ronnie Ed Berry, and two uncles Clifford and Richard Miller; two aunts Louise Sturgis and Darlene Allbaugh, Cousins Danny Norris and Debbie Allbaugh; niece Amy Roam and best friend Pam (Cottrell) Danielson.

The family of Tracy Lynn Shimer created this Life Tributes page to make it easy to share your memories.

Send flowers to the Shimer family.