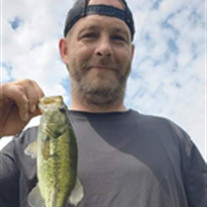 Timothy Earl Jacobsen, the son of Roger and Linda (Baldwin) Jacobsen, was born April 16, 1980 in Harlan, Iowa. He was a lifelong citizen of Harlan; attending grade school in Harlan, playing football, and graduating high school. Tim did leav for just a couple of years when he went to Iowa Central in Fort Dodge, Iowa to play football and then to California for one year for work. Tim returned to Iowa and held several positions for different companies. For the past 11 years, Tim has been working at Elkhart Plastics in Atlantic, Iowa. He considered his coworkers like family. They were very near and dear to him. On September 18, 2013, Tim married Amber Walters at the Nishna Bend Recreation Area in Shelby County. Tim was a man of many interests. He loved football, work, traveling, and fishing. He didn’t have a favorite place to travel, but anywhere with a watering hole was perfect for Tim. And we can’t forget that he loved his Nebraska Cornhuskers. They were always on his Saturday TV schedule during football season. Anytime they lost, he was not very happy. Truly the most important thing to Tim though was his family. He was a fantastic husband, father, son, brother, uncle, and friend. Tim suffered a massive heart attack on August 1st with onset seizures. As the seizures got worse, damage to the back of his brain occurred. On August 9, 2020, Tim passed away at the University of Nebraska Medical Center in Omaha at the age of 40. The last gift Tim was able to give was the gift of life with his ability donate his organs. A true testament to the caring man he was. Time was preceded in death by his mother Linda Jacobsen in 2019 and his grandpa Earl Baldwin. Those left to cherish his memory are his wife Amber Jacobsen of Harlan, Iowa; his children Jared Walters and Brody Jacobsen; father Roger Jacobsen of Harlan, Iowa; brother Tobey Jacobsen and his wife Barb of Carroll, Iowa; nephew Carson Jacobsen; nieces Carley Jacobsen and Joanna Strong; and many other family and friends.

The family of Timothy Earl Jacobsen created this Life Tributes page to make it easy to share your memories.

Send flowers to the Jacobsen family.