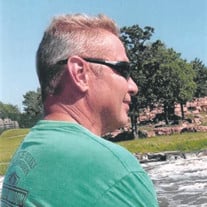 Tim Eugene Pieken, son of Kenneth and Joyce (Barker) Pieken-True, was born on July 24, 1958 in Fremont, Nebraska. He was baptized at the First Presbyterian Church in Cedar Bluffs, Nebraska and confirmed at the United Church of Avoca. He attended school in Avoca and graduated from AvoHa High School in 1977. After graduation he attended Iowa Western Community College to be a Tractor Mechanic. On April 7, 1979, Tim was united into marriage to Linda Maher in Shenandoah, Iowa. To this union three sons were born: Ryan, Nathan and Dustin. Tim worked for Avoca Implement until 1991, where he then went to work for Midwest Gas and MidAmerican Energy and retired in 2018. Tim loved to fish, ride his Harley Davidson motorcycle and was always rooting for the Iowa Hawkeyes. He was a veteran volunteer fireman and EMT on the Avoca Fire Department working for over 20 years. If Tim wasn’t cheering on the Iowa Hawkeyes he was coaching up the Viking Wrestlers. On Wednesday, August 25, 2021, Tim passed away at his home surrounded by his loving family having attained the age of sixty-three years, one month and one day. He was preceded in death by his father Kenneth and step-father William True. Left to cherish his memory is his wife Linda Pieken of Avoca, Iowa; sons Ryan (Robyn) Pieken of Harlan, Iowa; Nathan (Becky) Pieken of Avoca, Iowa; Dustin (Ali) Pieken of Atlantic, Iowa; eight grandchildren: Cyrus, Rosalyn, Ashyr, Eleanor, Emma, Finley, Sylvie and Ledger; mother Joyce True of Avoca, Iowa; siblings Terry (Connie) Pieken of Waterloo, Iowa; Pam Beasley of Springfield, Missouri; Bill True, II of Avoca, Iowa; Donna (Jeff) Slack of Viborg, South Dakota; nieces and nephews, other family and many friends. In lieu of flowers, family has requested memorials be addressed to any of the following: Avoca Boy Scout Troop #97 Avoca Fire Department Mighty Vikes Wrestling Club

Tim Eugene Pieken, son of Kenneth and Joyce (Barker) Pieken-True, was born on July 24, 1958 in Fremont, Nebraska. He was baptized at the First Presbyterian Church in Cedar Bluffs, Nebraska and confirmed at the United Church of Avoca. He attended... View Obituary & Service Information

The family of Tim Pieken created this Life Tributes page to make it easy to share your memories.

Send flowers to the Pieken family.