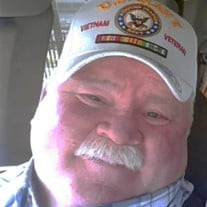 Terry Fred Lippold was born on October 21, 1952 to Loring and Donna (Warner) Lippold at the Harlan Hospital. He attended school in Shelby, Iowa until the family moved to a farm near Avoca. He graduated from AvoHa High School with the class of 1971. Terry served in the United States Navy as a Bosun Mate on the USS Hancock during the Vietnam War from 1971-1975. He was a proud serviceman and loved his country. After his time in the service he came home and continued to farm with his Dad. He met and married Linda Jensen in 1976. The couple had a daughter, Mia in 1981, and continued to live on the farm until they divorced. Terry met Cindy (Kennedy) in 1983. They dated for seven years and married in 1990 in Las Vegas. He inherited two additional children, Ben and Emily. He was a very good father to all three of his children. Terry loved farming and continued to farm in the Avoca-Hancock area for many years. He retired from farming in 2003. Terry and Cindy remained on the acreage and Terry had several different jobs including: driving truck for Midwest Walnut, and working for Phil and Jerry McCarthy. Terry retired in 2010. Terry and Cindy moved to Shelby in 2013. He remained an outdoorsman. He loved to hunt and play golf. Even when he didn’t’ do it anymore, he liked to watch it on TV. Terry had seven grandchildren: Kaly, Tessa, Max, Liam, Jaden, Ava, and Willie; and one great grandbaby still cooking. He adored his grandkids and they brought him great joy. On November 4, Terry was diagnosed with COVID-19 and hospitalized at Mercy Hospital in Council Bluffs, Iowa. He lost his battle on December 4 surrounded by his family, having attained the age of sixty-eight years, one month and thirteen days. Terry was preceded in death by his father Loring and mother Donna; nephew Shane Fender; and great nephew Caleb Davis. He is survived by his lovely bride Cindy Lippold of Shelby, Iowa; children Mia (Kyle) Herek of Omaha, Nebraska; Emily (Guy) Tomcykowski of Omaha, Nebraska; Ben (Misty) Tornblom of Shelby, Iowa; grandchildren Jaden Lippold; Ava and Will Tomcykowski; Kaly, Tessa, Max and Liam Tornblom; siblings Connie (Terry) Pieken of Waterloo, Iowa; Patty Lippold (special friend Scott) of Avoca, Iowa; Carol (Rob) Leaders of Bentley, Iowa; Janette Lippold of Underwood, Iowa; nieces and nephews, other family and many friends.

Terry Fred Lippold was born on October 21, 1952 to Loring and Donna (Warner) Lippold at the Harlan Hospital. He attended school in Shelby, Iowa until the family moved to a farm near Avoca. He graduated from AvoHa High School with the class... View Obituary & Service Information

The family of Terry "Loud" Lippold created this Life Tributes page to make it easy to share your memories.

Send flowers to the Lippold family.