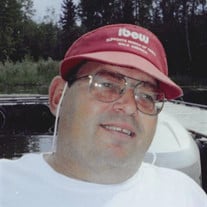 Terry L. Kuhr, 75, of Avoca, passed from this life into eternal life on Wednesday, May 12, 2021 at the Avoca Specialty Care Center. Terry was the son of Herbert and Jeraldine (Schuler) Kuhr. He was born in Atlantic, IA on August 6, 1945, which was the same day the first nuclear bomb was dropped on Hiroshima. Terry was born very premature and was so small he could fit in a shoebox. Terry did not have very good eyesight or hearing, but he more than made up for it with his amazing sense of humor. His first eyeglasses were a gift from his favorite teacher, Miss Russell, when he was in Kindergarten. He walked to and from school with his best friend, Babe Kohlscheen. If Terry had finished AvoHa High School, he would have been in the class of 1966. After High School, he worked as a farm hand for a few years. Later, with the help of friends, he worked at the Oakland Beef Plant. After leaving that job, he mowed lawns and removed snow around the town of Avoca. Terry’s car was his lawnmower. He loved starting his mornings at Charlie’s Barbershop, catching up on all the latest news, before completing his rounds visiting local businesses to chat with his numerous friends. Terry enjoyed attending AHSTW sporting events and watching the Hawkeyes, Yankees, and Bears on TV. Terry really loved going with his buddies on fishing trips to Canada in the summer. Terry also played town team basketball and bowled on several teams. He even won a doubles tournament one year. Terry had so many wonderful friends and he enjoyed giving some of them nicknames such as: Den Langer was “Dad”, Penny Langer was “Mom”, Babe Kohlscheen was “Bay-doh”, Nate Fair was “Nature”, Wayne Allen was “Juan”, Don Nelson was “Herky”, Pete Bramman was “Ham bone”, Tom Bruck was “Tom Cat”, and Roger Hargens was “The Big Ape”. Terry’s greatest love was being a proud member of the Murphy’s Law band. He helped setup, tear down, and even perform. His favorite songs to sing were “Soul Man” and “Tequila”. He was looking forward to the band’s next job on June 5 at The Exchange. Instead, he will be singing on heaven’s stage. Terry selected the other six band members to be his Pallbearers: Babe Kohlscheen, Den Langer, Nate Fair, Jerry Glenn, Tim Miner, and Tim Newcomb. Terry was preceded in death by his parents. He is survived by his sister, Sandra Griffin, of Omaha, NE and his brother Larry (Valdine) of Yuma, AZ, 5 nieces, 3 nephews, many cousins, and countless friends. A celebration of life will immediately follow at The Exchange in Avoca.

Terry L. Kuhr, 75, of Avoca, passed from this life into eternal life on Wednesday, May 12, 2021 at the Avoca Specialty Care Center. Terry was the son of Herbert and Jeraldine (Schuler) Kuhr. He was born in Atlantic, IA on August 6, 1945, which... View Obituary & Service Information

The family of Terry Lynn Kuhr created this Life Tributes page to make it easy to share your memories.

Send flowers to the Kuhr family.