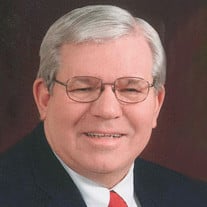 Terry M. Carley, son of Marion and Phyllis (Hagood) Carley was born on April 10, 1943 in Council Bluffs, Iowa. Terry grew up on a farm outside of Carson, Iowa and graduated from Carson-Macedonia High School with the Class of 1960. After graduation, he received a Master’s Degree in Pharmacy from Drake University in 1965. Terry worked at Lecox Drug in Shenandoah, Iowa right out of college until he purchased Crahan Drug in Avoca from Francis Crahan in 1970. On July 18, 1970, Terry was united in marriage to Julaine Green in Mineola, Iowa. From this marriage, they were blessed with two children: Janae and Jarrod. Terry owned and operated Carley Drug in downtown Avoca for 44 years until his retirement in 2014. He developed Wings America and several other business ventures throughout his lifetime. Terry was a big community supporter, he was the mayor of Avoca from 1980 to 1985, on the Board of Directors for Peace Haven and a lifelong member of the Trinity Lutheran Church. He took part in many organizations throughout his lifetime, some including: Rotary Club, Optomist Club, Lion’s Club, Church Council at the Trinity Lutheran Church, Iowa Pharmacy Association, Avoca Good Guys and Chairman for the Avoca’s Fourth of July Celebration. He loved college football and basketball, especially his beloved Drake Bulldogs, Iowa Hawkeyes and begrudgingly Iowa State, after both of his kids went to school there. He enjoyed following politics of all kinds, reading, traveling and playing cards. His favorite past time was following the activities of his children and now his grandchildren. Terry passed away suddenly on March 6, 2019 at Myrtue Medical Center in Harlan, Iowa attaining the age of seventy-five years, ten months and twenty-four days. In addition to his parents, he is preceded in death by his brother Douglas Carley. Left to cherish his memory, his wife of forty-eight years Julie Carley of Avoca, Iowa; children Janae and her husband Matthew Sternberg of Avoca, Iowa; Jarrod Carley of Elkhorn, Nebraska; grandchildren Kyle and Luke Sternberg of Avoca, Iowa; Morgan and Gwendolyn Carley of Elkhorn, Nebraska; other relatives and many friends.

Terry M. Carley, son of Marion and Phyllis (Hagood) Carley was born on April 10, 1943 in Council Bluffs, Iowa. Terry grew up on a farm outside of Carson, Iowa and graduated from Carson-Macedonia High School with the Class of 1960. After graduation,... View Obituary & Service Information

The family of Terry M. Carley created this Life Tributes page to make it easy to share your memories.

Send flowers to the Carley family.