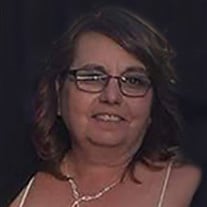 Teresa Louise Williams Rozenboom, daughter of Harold and Charlotte (Moore) Frank was born September 16, 1957 in Perry, Iowa. She was baptized at St. Patrick’s Catholic Church in Perry. She attended school in Manilla, Iowa, where she graduated with the class of 1975. After high school, Teresa worked at Pizza Hut in Wichita, Kansas; Harlan, Iowa and Shenandoah, Iowa. She started out as a server and worked her way up to manager. After returning to Harlan from Shenandoah, Teresa met David Williams. She worked various jobs. Her love for helping people, led her to her job at Concerned, working with persons with intellectual disabilities. On September 15, 1989, Teresa was united in marriage to David in Plattsmouth, Nebraska. They made their home in Nebraska until moving back to Harlan to raise their two children, Brent and Sarah. After the death of David, Teresa and the children remained in Harlan. On October 3, 2015, Teresa was united in marriage to Dennis Rozenboom in Reasnor, Iowa. They lived in Pella, Iowa for a year before making their home in Harvey, Iowa. Teresa gained three more children to this marriage: Megan, Christopher, and Curtis. She continued to work with the intellectually disabled. Teresa always remained close to her faith and was a member at St. Michael’s Catholic Church in Harlan. She loved spending time with her family and was a devoted and loving mother, wife, daughter, sister, and friend. Teresa died at the Comfort House in Pella, Iowa on August 11, 2021, attaining the age of sixty-three years, ten months, and twenty-six days. In addition to her parents Harold and Charlotte Frank, she was preceded in death by her husband David and father-in-law Gerald Rozenboom. She is survived by her husband Dennis Rozenboom of Harvey, Iowa; children Brent Williams of Harvey, Iowa; Sarah Williams of Pella, Iowa; Megan (Justin) Spencer of Oskaloosa, Iowa; Christopher Rozenboom of Pella, Iowa; Curtis (Kendra Willoughby) Rozenboom of St. Louis, Missouri; grandchild Hope Salle; siblings Linda (Gene) Wageman of Hancock, Iowa; Larry Frank of Mesa, Arizona; Traci (Mike) Wilwerding of Harlan, Iowa; mother-in-law Geneva Rozenboom; in-laws Lavern (Norma) Rozenboom; Debra (Fred) Van Ee; Merlin (Terri) Rozenboom; nieces and nephews; other family members and friends.

Teresa Louise Williams Rozenboom, daughter of Harold and Charlotte (Moore) Frank was born September 16, 1957 in Perry, Iowa. She was baptized at St. Patrick&#8217;s Catholic Church in Perry. She attended school in Manilla, Iowa, where she... View Obituary & Service Information

The family of Teresa L Williams-Rozenboom created this Life Tributes page to make it easy to share your memories.

Send flowers to the Williams-Rozenboom family.