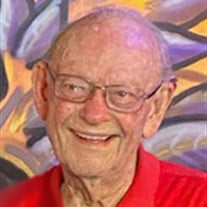 Ted L. Williams was born on January 17, 1926 to David and Irene (Brown) Williams in Knoxville, Iowa. Ted participated in many sports during his High School days at Knoxville with Track being his favorite. Upon graduation in 1944, Ted joined the Marine Corps and spent many months overseas at various locations during his Military Career. Upon completion of his Military Career, Ted enrolled at Simpson College to obtain a degree in Education. He graduated in 1951 and started his Teaching Career with stops at Elkhart and Pacific Junction before arriving at Harlan in 1955.Ted spent two Summers at Wyoming University to obtain his Masters Degree. He was the Basketball and Track Coach and assisted with Football during his early years at Harlan. Ted retired from teaching in 1987 with 32 years of service with Harlan High School. Ted place second in the Discus throw at Drake Relays in his Senior year of High School. Certificates rather than medals were given the participates during the War years. Some of his close friends in Altoona made the Drake Relays Personnel aware of the award. Drake Relay Personnel made a Medal presentation to Ted on his 93rd Birthday, 75 years after he had won the award Ted started youth baseball in Harlan during the Summer Months. His early team was better known as the Michel's Midgets. Later years, Ted started the Baseball program at the High School. Ted enjoyed Baseball and spent most of his Summer Months for many years as American Legion 7th District Chairman promoting Youth Baseball in the Area. Ted was united in Marriage on August 25, 1952 to Donna Joens in Highland Park, Illinois. Donna passed away on January 12, 2000 after 37 plus years of Marriage. Ted reconnected with Gloria Nichols a former Classmate from Knoxville. They spent 14 years together living in West Moines and Altoona areas. Gloria passed away on December 23, 2017. Ted continued to spent time in Harlan and Altoona. Ted often remarked that he had three Special Ladies in his Life. His Mother, Donna, and Gloria. Ted passed away in Des Moines on January 15, 2021 just short two days of his 95th Birthday. Survivors include Special Friends Harlan and Jocelyn Van Wyk and their extended Family of Runnells, Iowa, Randy and Deb Nowatzke of Harlan, Bernie Heller of Council Bluffs; nieces and nephews: Larry Stangl, Beth Stangl Clarke, Suzanne Stangl-Erkens, Jack Spitler, Dave Spitler, and Bill Johnson; and many friends and former Students. Interment with Military Rites will be held Friday, January 22, 2021 at 12:00 PM at Graceland Cemetery in Knoxville, Iowa.

Ted L. Williams was born on January 17, 1926 to David and Irene (Brown) Williams in Knoxville, Iowa. Ted participated in many sports during his High School days at Knoxville with Track being his favorite. Upon graduation in 1944, Ted joined... View Obituary & Service Information

The family of Ted L. Williams created this Life Tributes page to make it easy to share your memories.

Send flowers to the Williams family.