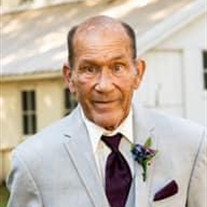 Steven Lee Olson was born March 9th, 1955 to Robert and Wanda Olson in San Diego, CA. Early in childhood he moved back to Des Moines, Iowa. As a child Steve was baptized in 1964 at Chesterfield Christian Church. He loved to play baseball, making the little league all-star team on a few occasions. He attended Des Moines East High School. After school, he went on to work in the highway construction industry. He worked in highway construction for nearly 30 yrs. His projects took him all over the country including to a few major airports and racetracks. In 1987, Steve married the love of his life, Luann Graves. Together they loved raising their kids and being involved in their community. Steve loved to be around sports and coached multiple teams for his kids. This passion also brought him the opportunity to announce high school football games for the local radio station KSOM. He loved being able to do this and often recounted some of his favorite moments from those games. Anyone that knew Steve knew how competitive he was and how deep his love for sports ran. Whether it was coaching or playing board games, he did everything he could to win. He loved spending time with his family and Friends. He was extremely proud of all his kids, grandkids and great grandkids and he was always eager to share stories about them. He was very meticulous in all that he did. This even included the tracking of every transaction he made or planning out the time that he would drive his grand daughter Addisyn (Cassandra) to and from school. Steve was very active in AA for a number of years, with the Whitehouse in Des Moines, IA being his first AA group in which he was extremely involved. He was very proud of his sobriety often carrying his sobriety coin with him everywhere. At the time of his death he had been sober for 37 years. Steve departed this life on Thursday November 18, 2021. He was preceded in death by his father, Robert Olson. He leaves to cherish his memory: his wife, Luann Olson of Neola, IA, Angela Hosman (Brad), Zach Cave (Kathy), Jeremy Olson (Shelby), Joshua Olson (Amanda), Cassandra Daringer (Tyler), Cody Olson; Mother Wanda Olson; sister Susan Olson, brothers Gregory Olson (Joan) and Michael Olson (Sherry); 14 grandkids (plus 1 on the way); 2 great grandkids (plus 1 on the way); and a host of other relatives and friends

Steven Lee Olson was born March 9th, 1955 to Robert and Wanda Olson in San Diego, CA. Early in childhood he moved back to Des Moines, Iowa. As a child Steve was baptized in 1964 at Chesterfield Christian Church. He loved to play baseball,... View Obituary & Service Information

The family of Steven Lee Olson created this Life Tributes page to make it easy to share your memories.

Send flowers to the Olson family.