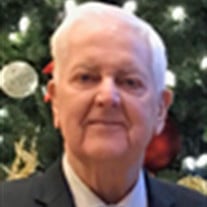 Stanley Russell Nichols, son of Stacy and Frances (Stewart) Nichols, Jr. was born on July 24, 1939 in Marshalltown, Iowa. He attended school in Boxholm, Iowa where he graduated with the class of 1957 from Boxholm High School. Stan also went on to attend Southwestern Community College in Creston, Iowa. Stanley also served his country honorably in the United States Navy. While living in Creston, Stan participated in various community theater productions and this is how he met his future bride, Mary Elizabeth Chapman. They were united in marriage on May 7, 1961. A short time after their marriage, Stan and Mary Elizabeth made their home in Cherokee, Iowa where Stan worked as a butcher. Their first two children were born in Cherokee, Linda and Lisa. They then made their home in Des Moines where he sold insurance through IDS. Their first son, Steven was born while the family was living in Des Moines. Stan and Mary Elizabeth then made their home on a farm outside of Creston for a short period of time before moving into Creston. The family then moved to Harlan, Iowa in 1977 where son Michael was born. Stan worked for Boar Power and later Moorman Seeds. He stayed in agriculture sales and sold farm implement equipment for Westendorf Manufacturing of Onawa, Iowa. Through the years, Stan was active in the Congregational United Church of Christ in Harlan and served on their board. Stan was also very active in the Masonic Lodge and Shriner's and was honored for being a member for over fifty years. Stan was a huge fan of tractor pulls and stock car racing. When his son Michael won the Ken Schrader Real Racer of the Year Award, named after Stan's favorite NASCAR Driver, Michael dedicated the award to his father and gave him the plaque he was awarded. When Stan made the decision to move into the Salem Lutheran Nursing Home in Elk Horn, Iowa to be with his wife, all he wanted to make sure went with him was that plaque. Stan died on Saturday, November 23, 2019 at the Salem Lutheran Nursing Home in Elk Horn having attained the age of eighty years, three months and thirty days. In addition to his parents, Stan was preceded in death by his son Steve and his sister Nancy Lindstrom. He is survived by his wife of over fifty-eight years, Mary Elizabeth Nichols of Elk Horn, Iowa; his children: Linda and her husband Robert Holst of Omaha, Nebraska; Lisa Nichols of Jacksonville, Florida and Mike Nichols and his wife Anita of Harlan; daughter-in-law Toni Nichols of Elkhorn, Nebraska; ten grandchildren; eight great grandchildren; sister Janet Norton of Prescott Valley, Arizona; brothers Neil Nichols and his wife Norma of Maroa, Illinois and Lyle Nichols and his wife Jan of Quincy, Illinois; nieces and nephews other relatives and many friends.

Stanley Russell Nichols, son of Stacy and Frances (Stewart) Nichols, Jr. was born on July 24, 1939 in Marshalltown, Iowa. He attended school in Boxholm, Iowa where he graduated with the class of 1957 from Boxholm High School. Stan also went... View Obituary & Service Information

The family of Stanley Nichols created this Life Tributes page to make it easy to share your memories.

Send flowers to the Nichols family.