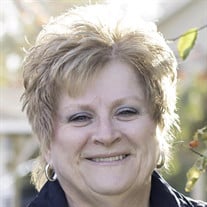 Sherry Lynn McMullen, daughter of Rex and Ruth (Jensen) Garside, was born on July 2, 1956 in Chicago, Illinois. She passed away at UNMC on Tuesday, January 4, 2022 attaining the age of 65 years, 6 months, and 2 days. Sherry graduated from Denison High School with the class of 1974. During her senior year of high school she worked part time at Crawford County Bank through a work study program, and in June of that year she was hired on full time. Sherry had many job descriptions while employed there. She was part of the bank until the day of her passing, allowing her 47 years of employment. While in high school, Sherry was part of a church sponsored Coffee House and singing group where she met John McMullen. On September 4, 1976 the two were united in marriage at the Kiron Baptist Church, and were blessed with 45 years. They made their home in Kiron, Iowa for 14 years where they were blessed with their first two daughters, Callie and Abbie. In 1990, they moved to Denison, Iowa and were later blessed with their third daughter, Robbie. Sherry's faith and family were very important to her. She was involved in the churches she attended, including Kiron Baptist, Denison Baptist, and Grace Church. Sherry loved attending her daughters’ activities. She was a Girl Scout Leader for several years, as well as a ribbon table worker at swim meets. She continued her love for those activities by attending her grandchildren’s activities often. Her grandchildren were very special to her and she was very active in their lives as well. She looked forward to taking them to new movies at the theater, and having them spend a day or the weekend at her and John's house which included lots of arts and crafts or baking. There may have been some shenanigans that took place as well! Sherry was very much a people person. She had a very big heart, and would do most anything for anyone. She was considered the face of the bank for many years. She had a warm smile to greet everyone, and a quick wit that could withstand all those eager to feed her some guff. For many years, Sherry was the cheery voice that greeted you on the phone when calling into the bank. She thoroughly enjoyed taking part in the Halloween and Ugly Sweater dress up days, which also meant parading up and down the streets of Denison. She loved her Slim Jim (SJ) Gang like family. The group gathers once a week and enjoys each other’s company, supporting one another through all of life’s ups and downs. Their meeting places changed over the years, but her favorites were Dairy Queen and Casey’s. They planned yearly weekend trips to Craft Shows with overnight big girl slumber parties, trips which required them to dress up like nuns, day trips tanking down a river, after work shopping for last minute gifts, or holiday gatherings which she loved hosting. Good clean fun was had by all during their excursions. The SJ Gang and Bank family were very near and dear to Sherry’s heart. Sherry was preceded in death by her daughter Robbie, grandson Griffin, granddaughter Olivia, and her brother Dennis Garside. Left to cherish her memory is her husband John McMullen of Denison, Iowa; daughter Callie (Alan) Nemitz of Denison, Iowa; daughter Abbie (Jerod) Nielsen of Schleswig, Iowa; her parents Rex and Ruth Garside of Denison, Iowa; 7 grandchildren Autumn, Camdyn, Ayvah, and Cambrie Nemitz and Carter, Addilynn, and Kinnick Nielsen; and many other family and friends.

Sherry Lynn McMullen, daughter of Rex and Ruth (Jensen) Garside, was born on July 2, 1956 in Chicago, Illinois. She passed away at UNMC on Tuesday, January 4, 2022 attaining the age of 65 years, 6 months, and 2 days. Sherry graduated from Denison... View Obituary & Service Information

The family of Sherry Lynn McMullen created this Life Tributes page to make it easy to share your memories.

Send flowers to the McMullen family.