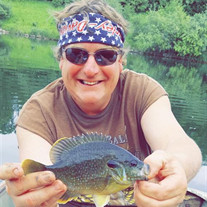 Scott Alan Petersen was born to Glenn and Irene (Christensen) Petersen on February 8, 1964 in Harlan, Iowa. He was the youngest of seven kids. He was baptized at the First United Methodist Church in Harlan, Iowa and graduated from Harlan Community High School in 1982. He was united into marriage on May 7th, 1994 to Nicole Heese in Kirkman, Iowa. To this union three children were born: Ashley, Andrea and Abbie. In 2008, Scott started a life with Kim Stessman-Assmann and her children; Kaitlyn, Grant, Garrett, and were later engaged. He started Scott’s Hauling in 1992, eventually adding on a roll off business. Scott owned the business until 2004 and shortly after he moved to Shelby, Nebraska to work for Callaway Roll Offs. He returned home and started working for Prolient and after Prolient he started a supervisor position at Molded products and then went on to be a maintenance technician with Essentia until his time of death. Scott enjoyed fishing, playing pool, golfing and playing tennis. Scott spent many hours on his beloved Harley with Kim. He loved spending time with his family, most importantly his grand babies who meant the world to him. Friends loved him and he loved his friends. Most would describe Scott as a man with a big heart who was able to lend a helping hand whenever he was needed; so with his infectious and giving personality, he was able to become a donor after his passing. Scott passed away on Thursday, June 27, 2019 having attained the age of fifty-five years, four months and nineteen days. He was preceded in death by his mother Irene, father Glenn and brother Brian. Left to cherish his memory are his three daughters; Ashley, Andrea and Abbie of Harlan, Iowa; fiancé Kim Stessman-Assmann and her three children: Kaitlyn, Grant and Garrett of Harlan, Iowa; siblings James Petersen of Red Oak, Iowa; Debra Petersen of Harlan, Iowa; Donna Petersen of Harlan, Iowa; Dennis Petersen of Harlan, Iowa; Gaige Petersen of Omaha, Nebraska; sister-in-law Brunhilda “Hita” Petersen of Harlan, Iowa; grandchildren Jade Ransom, Addison Petersen, Livianna Rowland, and Slate Gitch all of Harlan, Iowa; many nieces and nephews, other family and many friends.

Scott Alan Petersen was born to Glenn and Irene (Christensen) Petersen on February 8, 1964 in Harlan, Iowa. He was the youngest of seven kids. He was baptized at the First United Methodist Church in Harlan, Iowa and graduated from Harlan Community... View Obituary & Service Information

The family of Scott Alan Petersen created this Life Tributes page to make it easy to share your memories.

Scott Alan Petersen was born to Glenn and Irene (Christensen)...