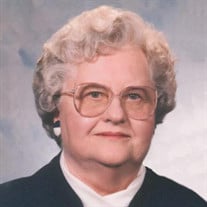 Her life was full of light and marked by laughter. Ruth Mae Sorensen was born on November 11, 1926, to Arthur Stephen and Nina Knudsen. On August 19, 1947, Ruth married Dale Eldon Sorensen at Bethel Baptist Church. Dale used to tell the story of the day he met Ruth. He went to Bethel Baptist Church for a BYF youth group meeting and saw her leading the meeting as the youth group president. He thought, "That's the girl for me." The Sorensens continued their families' tradition of farming as they raised pigs, cattle, chickens, corn, and soybeans over the years. Ruth was instrumental in all of the farming activities but especially in the chicken operation which not only fed her family but many others as she sold chickens and eggs. Ruth devoted her life to being a homemaker; her proudest achievement was her family. She and Dale raised four children: Arlin, Bradley, Brenda, and Jolene. She was very proud that each of her children married spouses who loved Jesus. Her patience is something each of her children remembers. She would often respond with gentleness and laughter when they pulled some of their ornery stunts, such as the day Jolene brought her horse Tipo into the house and Ruth discovered him in the bathtub. Perhaps her patient response was due to the fact that Ruth had a feisty streak of her own, so orneriness was something she appreciated in her children and grandchildren. An effective leader, Ruth was always organizing people with the end goal always being to serve and love others well. She led everything from 4-H groups to garden clubs to women's circles at church. Over the years she touched many in her community. She was known by a whole generation of children from First Baptist Church as Grandma Ruth because of her faithful service in the church nursery every Sunday during Sunday School hour. Hospitality was also something that Ruth excelled at with family, friends, and strangers alike. Planting and harvest season were two of her favorite times of the year, as she enjoyed feeding all of the men in the fields. If there was someone new to the church, they were invited home for dinner that day. She was always baking and was known for her delicious wedding cakes. Although Ruth spent her entire life in the Harlan area, she always had a global vision. She was passionate about world missions and sharing the good news that Jesus died to save sinful people because her own story was so marked by her relationship with Jesus Christ. She had personally seen how Jesus had changed her and so many in her family, and she wanted others all over the world to have that same peace, hope, and joy. She would gather old Sunday School and Bible School curriculum and send them to missionaries all over the world. She and Dale also often hosted missionaries in their home or at their dinner table. In their retirement, Dale and Ruth enjoyed traveling the world. She visited every state in the United States except Delaware. They also took a trip to Thailand to encourage missionaries there. Having dementia in her later years did not dim her spirit; she remained quintessentially "Ruth." When people would ask how she was doing, she would smile and say, "Just ducky." She would then spend the rest of the visit being curious about her visitors' lives. She was very proud that her sons Arlin and Brad chose to farm and that Arlin's son Peter and Brad's son Dean have rooted their families on the farm as well. She would often tease that maybe their little portion of Oak Road could be re-named Sorensen Road since the four families live and farm so closely together; and then she would laugh at her own joke because she never lost that fun sense of humor. Ruth's long battle with dementia ended on April 2 as she went Home to be with Jesus. Legacy was something that Ruth epitomized as she lived intentionally toward a vision of a tomorrow that she knew she may never see. She sowed seeds of kindness, hospitality, and joy through every interaction with her children and grandchildren, modeling for them what it meant to value others above ourselves and to seek the good of our community. Those who had the privilege of knowing Ruth will be forever marked by the light that she displayed and the laughter that was always present wherever she went. A Memorial Service for Ruth Sorensen will be held at a later date. Private Interment will be held at the Harlan Cemetery in Harlan, Iowa. Survivors include her children Arlin (Nancy) Sorensen of Harlan; Brenda (Dennis) Prothero of Rochester, MN; Brad (Susan) Sorensen of Harlan; Jolene (Mark) Fincel of Oskaloosa, IA; 10 grandchildren; 9 great grandchildren; brother Dean Knudsen of Lafayette, IN. Condolences can be sent to Brad Sorensen 650 Oak Road Harlan, Iowa 51537.

The family of Ruth Mae Sorensen created this Life Tributes page to make it easy to share your memories.

Her life was full of light and marked by laughter. Ruth Mae Sorensen...

Send flowers to the Sorensen family.