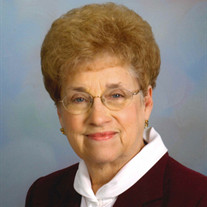 Ruth Ann Barry, daughter of Alfred and Leta (Morrison) Nielsen was born December 19, 1932 on a farm northeast of Defiance, Iowa. She was baptized and confirmed at the Salem Evangelical Church in Defiance. She attended school at the Defiance Public School and then graduated from Irwin High School in 1950. Ruth Ann went on to Simpson College in Indianola where she received a pre professional teaching certificate. She taught at Wall Lake and third grade at Laurel School in Harlan. She later graduated with a bachelor of arts in education from Buena Vista. Ruth Ann always had a love for music. She was a talented pianist and organist who started accompanying a good looking, tall soloist by the name of Milton Barry. It was only natural that they would fall in love and were married on July 10, 1955 at the Evangelical United Brethren Church in Defiance. They settled three miles west of Irwin on Milton's family farm and became parents of three girls: Cyndi, Shelly, and Stacy. Ruth Ann kept busy serving the community and church. She provided music for many special occasions, such as weddings, funerals, school solo/ensemble contests, and church services. Ruth Ann performed a self-written program entitled "What America Means to Me" with her husband, sister, and brother-in-law, which was given throughout the state of Iowa in 1976. She was an active member of the Irwin Order of Eastern Star. In 2002, she was named the Grand Organist of Iowa for Eastern Star. In 2006, Ruth Ann was named Shelby County and State of Iowa Mother of the Year. Along with this, she was a member and officer of the Irwin United Methodist women, president of the Council Bluffs District of the United Methodist Women, and a member of the Myrtue Medical Center Auxiliary. Ruth Ann was the president of the Irwin-Kirkman Community School Board for twelve years. In 1993, she was appointed by Governor Terry Branstad to the Iowa College Student Aid Commission, which she continued to serve until 1998. The church was very important to Ruth Ann. She seldom missed playing the organ on Sundays for over 70 years. She was the director of the Junior Choir, accompanied the Senior Choir, taught Sunday School and Bible School. In 1972, she received a special membership pin for her service in the Irwin United Methodist Church. Along with sharing her musical talents with Milton, they loved to spend time traveling with their special friends, Bill and Louise Ahrenholtz. Ruth Ann loved to go to Branson to see various shows. She was one of the biggest fans for her grandchildren at all of their sporting and musical events. Ruth Ann loved to cheer on the IKM Hawks and IKM-Manning Wolves and was awarded Fan of the Year in 1995. She was often found in the kitchen baking her famous pies and brownies, along with watching her game shows. Ruth Ann was known for her cheating abilities in rummy and enjoyed Canasta card club with her friends. Ruth Ann is survived by her husband Milton Barry of Harlan, Iowa; children Cyndi and her husband Tony Groshong of Cambridge, Nebraska; Shelly and her husband Lamont of Irwin, Iowa; Stacy and her husband Terry Rosonke of Norwalk, Iowa; six grandchildren; three great-grandchildren; sibling Marie McLaughlin-Pearce and husband Clay of Harlan, Iowa; sister-in-law Nadine Nielsen of Hendersen, Nevada; nieces and nephews; other family members and many friends.

Ruth Ann Barry, daughter of Alfred and Leta (Morrison) Nielsen was born December 19, 1932 on a farm northeast of Defiance, Iowa. She was baptized and confirmed at the Salem Evangelical Church in Defiance. She attended school at the Defiance... View Obituary & Service Information

The family of Ruth Ann Barry created this Life Tributes page to make it easy to share your memories.

Send flowers to the Barry family.