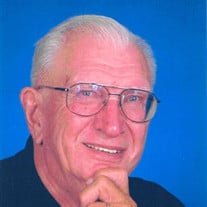 In lieu of flowers, donations can be made to either of the following: Donna Reed Foundation 1305 Broadway Denison, Iowa 51442 United Presbyterian Church 205 N. 24th Street Denison, Iowa 51442 Harrison County Humane Society 106 N. 5th Ave Logan, Iowa 51546 Due to the recent pandemic, the family has chosen to have a private graveside service at Tarkio Home cemetery in Tarkio, Missouri. A Celebration of Life will be held at a later date. Roy Voggesser of Denison, Iowa, passed away on October 4, 2020, at his home in Denison, Iowa, at the age of eighty-six years, five days. Roy was born to Mathias and Helen (Koch) Voggesser on September 29, 1934 in Atlantic, Iowa. He graduated from Atlantic High School in 1952. He attended Iowa State Teacher’s College in Cedar Falls, Iowa, where he was a standout lineman on the football team. He graduated with a degree in Physical Education in 1956. He started his teaching career the next year in Adel, Iowa. He was drafted into the U.S. Army where he served stateside for two years and achieved the rank of Specialist 4th Class in the medical corps in San Antonio, Texas, were he typed and revised training manuals and worked in photography. After being discharged from the service, he continued his teaching and coaching career in Walnut, Iowa, where he met Elizabeth Ann (Stevensen) Voggesser. Roy and Ann were united in marriage on June 8, 1961. Roy moved to Denison, Iowa, with Ann that summer, where he taught Biology at Denison High School until his retirement in 1991. He coached football and track for the first few years. He was instrumental in the acquisition and construction of the school greenhouse. He enjoyed working in the greenhouse, helping students achieve their educational goals, teaching CPR, and accompanying the FFA on Canadian fishing trips as Chief Cook. He and Ann had two children, David and Nancy. He was a member and Elder of the Denison United Presbyterian Church. Roy earned his Masters of Science Education from the University of Northern Colorado in Greeley, Colorado, over four summers. Furth studies were done at Western State College in Gunnison, Colorado. His joy was centered around volunteering at the Donna Reed Foundation and Museum. He was a board member who never hesitated to do anything that needed to be done, from mopping floors to fixing equipment to giving his famous tours. He truly loved meeting the performers as well as those involved in the events he spend many hours supervising. He earned various awards, including the Paul Harris Fellow Recognition from the Denison Rotary, the Donna Reed Foundation Benefactor Award(2009), and the Denison School Alumni Association Wall of Pride recognition(2015). He enjoyed traveling the world with Ann and spent his retirement winters in Port Isabel, Texas, where he enjoyed fishing in the Laguna Madre, sightseeing, Manuel’s breakfast tacos, shrimp from Dirty Al’s, and relaxing. In the spring, you would find him elbow-deep in dirt, gardening. He was well-known for his love of telling stories. He is survived by his wife Ann of Denison, IA, son David Voggesser of Sugar Grove, IL, daughter Nancy Voggesser of Logan, IA, his grand dogs Sexton and Sunshine and grand cats Sylvia and Shakespeare. Roy is preceded in death by his infant sister Helene; his parents; sister Dorothy Voggesser; brothers Max Voggesser, Leo Voggesser, Paul Voggesser, Bob Voggesser, and Harold Voggesser. On Friday October 9,2020 at 1:00 PM a burial service was held for Roy Voggesser at the Tarkio Home Cemetery in Tarkio, Missouri. Reverend Jennifer Olson officiating the service. Chris Voggesser, Randy Lane, Aaron Wills, Steven Wills, Don Uker Jerry Peterman, Nathan Mahrt, Jerry Bryan, Jim Sharp, Mark Voggesser, Gary Voggesser, Tim Ryan, and Eric Olson served as Honorary Casket Bearers for the service. The interment was held at Tarkio Home Cemetery in Tarkio, Missouri.

The family of Roy Voggesser created this Life Tributes page to make it easy to share your memories.

In lieu of flowers, donations can be made to either of the following:
Donna...

Send flowers to the Voggesser family.