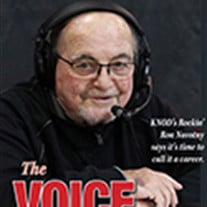 Not sure what to send?

Ronald Alan Novotny Ronald Alan Novotny son of Helen (Humpal) and Ernest Novotny was born on June 11, 1949 in Cresco, Iowa. Ron was one of six children. Ron attended school in Protivin, Iowa at the Holy Trinity Grade School and graduated from Rudolphinum High School in Protivin, Iowa with the Class of 1967. He was active in sports, especially baseball, basketball, and fast pitch softball teams. His fast pitch team was a state softball qualifier. Ron was a bat boy, a player, and a manager throughout the years. After high school, Ron attended Brown College in Minnesota and received his degree in broadcasting in 1968. He took a job with KWVY in Waverly, Iowa in the sports department for Wartburg and Waverly High School. In 1985 Ron took the job with KNOD as their sports broadcaster for Harlan Community and other sports programs in Western Iowa. He also had a passion for golf. Ron passed away May 7, 2022 attaining the age of 72 years, 10 months and 26 days. He was preceded in death by his parents Ernest and Helen Novotny and a brother Michael Novotny. He is survived by his siblings Pat Sir of Lourdes, IA; Linda (Don) Baltes of Rochester, MN; Randy (Pamela) Novotny of Protivin, IA; Sue (Len) Cutsforth of Lawler, IA; nieces and nephews Chad Cutsforth, Troy Cutsforth, Brian Baltes, Steve Baltes, Amy Baltes, Ashley Baltes, Missy Brevig, Meagan Sobolik, Michael Novotny, Tom Sir; many great nieces and nephews. Burial will be at the Holy Trinity Cemetery in Protivin, Iowa at a later date.

The family of Ronald Alan Novotny created this Life Tributes page to make it easy to share your memories.