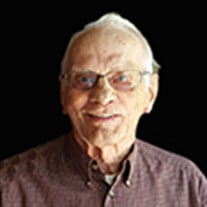 Ronald Mathiasen, son of Edward, Sr. and Hannah (Greve) Mathiasen was born on February 10, 1937, in Harlan Iowa. He attended primary school at center #7 and later graduated from Harlan High School. Ron proudly served his country in the United States Army. He was a part of the 7th Army division and was stationed in Germany. Ron married Linda Chambers in 1963. From this union, three children were born: Curt, Greg and Suzanne. Greg passed away in a motor vehicle accident in May of 1990. Ron farmed around the Harlan area as well as Logan area for several years before going to work at the nuclear power plant in Fort Calhoon in the 1980s. Some of his other occupations during his years included delivering furniture for Hineline out of Harlan and working for Molded Products in Harlan. Ron was a man of little needs. He took joy in the simple things in life, such as fishing, reading science fiction novels, going to coffee with his buddies, eating some of his favorite foods such as fish and sweets (he never turned down a sweet) and spending time with his family. Ron passed away on Sunday, June 12th, 2022, at Elm Crest Retirement Center in Harlan, Iowa, with his children there to be with him. He had celebrated his 85th birthday in February. In addition to his parents, he was preceded in death by his brothers, Edward, Robert, Howard and Norman as well as his son, Gregory. He is survived by his children, Curtis and Suzanne (Kevin) Goshorn, both of Harlan, granddaughters, Nicole and Brooke Goshorn, of Harlan, siblings Rosemary Petersen of Elk Horn, Iowa, his twin sister Ann Wendt of Omaha, Nebraska, sister-in-law Jo Mathiasen of Harlan, nieces and nephews, other family members and friends.

The family of Ronald Lee Mathiasen created this Life Tributes page to make it easy to share your memories.

Send flowers to the Mathiasen family.