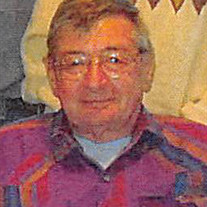 Ronald Leonard Luth, son of William and Mabel (Voss) Luth, was born on January 30, 1947 in Climbing Hill, Iowa. When Ronald was young, the family relocated to a farm near the Charter Oak and Ricketts, Iowa area. Ronald was baptized and confirmed at St. Luke Lutheran Church in Ricketts, Iowa and attended Charter Oak School in Charter Oak, Iowa. At the age of 20 Ronald enlisted in the Navy. After he was discharged, he helped with the family farm. On October 8, 1971 Ronald was united in marriage to Rosie Coe. To this union two sons were born, Randy and Richard. Ronald worked maintenance at Crawford County Memorial Hospital in Denison, Iowa. He then drove truck for Mid Continent Trucking in Denison, Iowa and eventually retired working for the City of Denison, Iowa. After retirement Ronald enjoyed working on his house inside and out, camping, and spending time with his family, visits and phone calls from his nephew Henry; and Bev Jessen, of Battle Creek, Iowa. He enjoyed coming to Henry and Bev’s house for Thanksgiving dinner and even tried to come in snow storms! Ronald enjoyed watching Price is Right and Wheel of Fortune, and did not like being disturbed during this time. He would listen to KDSN every morning at 9:00 A.M. as Propane Hank, his nephew, would be on the talk show. Ronald died Wednesday, August 18, 2021 at the age of 74 in Denison, Iowa. He was preceded in death by his parents, William and Mabel Luth and his wife Rosie. Left to cherish his memory are his sons Randy Luth and Richard Luth both of Denison, Iowa; his sister Laura Stevens of Battle Creek, Iowa; his grandchildren Sophia Luth, Ryder Luth, Todd, Shelby, Kambree Hansen, Rozia Luth, Rylee Luth; many nieces and nephews including great and great-great nieces and nephews, many cousins and friends.

Ronald Leonard Luth, son of William and Mabel (Voss) Luth, was born on January 30, 1947 in Climbing Hill, Iowa. When Ronald was young, the family relocated to a farm near the Charter Oak and Ricketts, Iowa area. Ronald was baptized and confirmed... View Obituary & Service Information

The family of Ronald Leonard Luth created this Life Tributes page to make it easy to share your memories.

Send flowers to the Luth family.