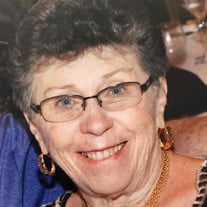 Rona Jean Bromert was born September 11, 1950 in Denison, Iowa to Leonard and Ruth (Vetter) Riessen. She was an “Iowa girl” always, growing up near Vail where she walked beans on the family farm and played with her sister Lana and many cousins and neighbors. She graduated from Ar-We-Va in 1968 where she made school a learning and fun experience. After graduation she went to Minneapolis to the Medical Institute of Minnesota where she became a laboratory technician. Naturally her list of friends grew again. It was here she met Joyce Hummel who became a “sister” from a different mother. Broadlawns Hospital in Des Moines was her first job. While working there and coming back to her roots, Vail, for weekend visits she met the true love of her life, Richard Bromert. Chantelle, Richard’s daughter, was added to Rona’s list of family. Richard and Rona married June 11, 1976, and they returned to their beloved Vail community. Their unconditional love gave them two sons, Justin and Lance. These respectable young men added 4 grandchildren for her to love deeply. Kallie and Karson live only one mile from them and Mataya and Jace live nearby in Dow City. All close enough for Richard and Rona to be able to attend their school sporting events and 4-H functions. Rona worked 35 years at Manning Hospital where her long list of friends continued to grow daily as she knew no strangers and cared for everyone. She was in her realm of joy as she hosted parties for family and neighbors, playing cards, dominos, and fixing delicious meals. She also loved traveling with her beloved Richard and her Wisconsin “family”. Her smile and legacy is remembered by all who knew her. She was preceded in death by her parents, Leonard and Ruth Riessen, and in-laws, Kenneth and Florence Bromert. Rona is survived by her husband Richard of Vail; two sons, Justin (Ann) Bromert of Vail and Lance Bromert of Dow City; 4 grandchildren, Kallie and Karson of Vail; Mataya and Jace of Dow City; Richard’s daughter Chantelle and her children Keely, Shea, and Patrick of Missouri; a sister Lana (Terry) Ragaller of Story City, Iowa; brother in-law and sister in-law David and Polly Bromert of Missouri; Deann (Mark) Hagedorn of Wisconsin; nephews, cousins, and many other beloved relatives and friends.

Rona Jean Bromert was born September 11, 1950 in Denison, Iowa to Leonard and Ruth (Vetter) Riessen. She was an &#8220;Iowa girl&#8221; always, growing up near Vail where she walked beans on the family farm and played with her sister Lana... View Obituary & Service Information

The family of Rona Bromert created this Life Tributes page to make it easy to share your memories.

Send flowers to the Bromert family.