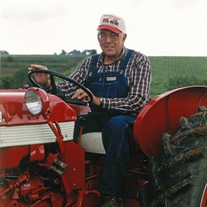 Roland John Wegner, son of Paul and Marcella (Oppold) Wegner, was born June 1, 1931 in Panama, Iowa. He was baptized and confirmed at St. Mary’s Catholic Church in Panama. He attended St. Mary’s Catholic School in Panama. He was offered a full college scholarship in vocal but after graduation he made the decision to stay home and help his father and brother on the farm. On March 5, 1957, Roland was united in marriage to Velma Petersen at St. Mary’s in Panama. Seven children were born to this union: Debra, Daniel, Robert, Paul, David, Roger, and Linda. They remained on the farm until moving to Harlan in 1976. Roland sold seed for over 20 plus years for Wilson Hybrids. He also worked at Shelby County Sanitation and then retired at the age of 80 from the Landfill. Roland always had a love for farming and would keep up on what the markets were doing, how yields were going for the year and he would watch for grain prices. He would watch RFD TV to pass the time and he loved taking care of his yard which was always immaculate. In January of 2018, he moved to Rose Vista Nursing Home in Woodbine. Roland died on Saturday, March 14, 2020 at Myrtue Medical Center in Harlan, attaining the age of eighty-eight years, nine months, and thirteen days. In addition to his parents, he was preceded in death by his wife Velma, sons Daniel and Roger, infant granddaughter Kaitlyn, and brothers Walter and Donald. He is survived by his children Deb and her husband Bruce Busing of Logan, Iowa; Bob Wegner and his wife Jane of Prescott, Arizona; Paul Wegner and his wife Kristi of Harlan, Iowa; David Wegner and his wife Kelly of Carroll, Iowa; Linda and her husband Craig Adair of Logan, Iowa; 17 grandchildren; 20 great grandchildren; sister Luella and her husband Glen Heese of Bellingham, Washington; nieces and nephews; other family members and friends.

The family of Roland John Wegner created this Life Tributes page to make it easy to share your memories.

Send flowers to the Wegner family.