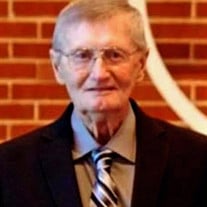 Roger Curtis Larson, son of Eugene and Myrtle (Johnson) Larson was born on April 6, 1937. Roger graduated from Kiron, Iowa with the class of 1955. He joined the National Guard after graduation. Roger married Gloria on August 28, 1960. They raised two sons Kevin and Keith in Kiron, Iowa. Roger grew up with farming all around him. That is the life that he enjoyed all through the years. He worked for a number of farmers over the years driving truck, hauling grain and gravel and following sprayers around with the water trailer. He also enjoyed livestock. He was employed at the Denison Livestock and Carroll Livestock for years. After his years of working on the farm he still enjoyed driving by and stopping in to see what everyone was up to. He would talk about the good old days up until his final days. As the saying goes you can take the boy out of the country but can't take the country out of the boy. Roger enjoyed going to tractor pulls and stock car racing. He was usually at every sporting event and musical for his grandchildren. He loved spending time with his family. He also enjoyed traveling to new places to eat. On January 31, 2021, Roger passed away peacefully at Eventide Lutheran Home. Roger was preceded in death by his parents Eugene and Myrtle Larson, his brother Gordon Larson, his sister Carolyn Pearson, and his grandson Andrew Larson. Those left to cherish his memory include his children Kevin (Anita) Larson of Denison, Iowa; Keith (Ginny) Larson of Schleswig, Iowa; his grandchildren Aaron Larson, Kim Larson, Cierra Larson, Aaric Larson, Austin (Tabby) Larson, Alexis (Brenner) Moore, and Aidan Larson; his great-grandchildren Anthony Larson, Kysen Larson, and Cora Moore; his nieces, nephews, cousins, and friends.

Roger Curtis Larson, son of Eugene and Myrtle (Johnson) Larson was born on April 6, 1937. Roger graduated from Kiron, Iowa with the class of 1955. He joined the National Guard after graduation. Roger married Gloria on August 28, 1960. They... View Obituary & Service Information

The family of Roger C. Larson created this Life Tributes page to make it easy to share your memories.

Send flowers to the Larson family.