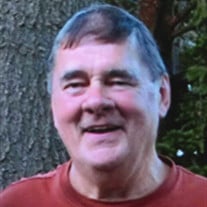 Roger Frank Ewert was the firstborn son of Frank Ewert and Agnes Elizabeth Coby Ewert on April 19, 1942, at Sherman Hospital in Elgin, Illinois. Roger spent his growing-up years in Crystal Lake, Illinois playing baseball and other sports, riding his bike, and reading in a tree. He was baptized and confirmed at the Crystal Lake Methodist Church. He graduated from Crystal Lake High School and headed off to Cornell College in Mount Vernon, Iowa. He was active in the social group sports, College Choir, and the Madrigal group. It was there he met Donna Rose Johnson. One week after graduation, they were married at the Franklin Park United Methodist Church in Illinois and soon began teaching in Bensenville, Illinois. Roger taught English at Blackhawk Middle School for 36 years, serving as Department Chair, and administrator. He also served as Reference Librarian at the community library. Roger continued his education at Northern Illinois University with a master’s degree and many other credits. They raised their family in Elmhurst, Illinois. Roger was active in the Elmhurst United Methodist Church and later at Westchester Community Church, a United Church of Christ. During this time he became an active sports memorabilla collector. Many family activities centered around sports activities. In 2002, the family moved to Harlan, Iowa. He became an active member of the Congregational United Church of Christ, singing in the choir and serving on many local church, association, state, and national committees and responsibilities. When we first visited Harlan, he was impressed with the Harlan Community Library. He served on the Library Board until just before his death. He spent many hours utilizing the library resources. Roger died at home on August 3, 2020, attaining the age of 78 years 3 months and 15 days. He was preceded in death by his parents and his brother Craig Colby Ewert. Those left to treasure many wonderful memories are his wife Donna, his children: Rebecca Schaefer (Kevin) in Downs, Illinois, Jennifer Anderson (Vaughn Campbell, her fiancé) in Poplar Bluff, Missouri, Benjamin Ewert in Harlan, and RJ Ewert (Kelsey) in Poplar Bluffs, Missouri and the grandkids Carson Schaefer, Kamdyn, Izak, and Madilynn Ewert, and sister-in-law Mary Ewert, nephew Ivan Ewert and niece Katrina Ewert...and many friends. In lieu of flowers the family suggest memorials be made to Congregational Church or the Harlan Community Library.

The family of Roger Frank Ewert created this Life Tributes page to make it easy to share your memories.

Send flowers to the Ewert family.