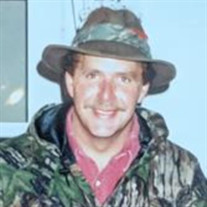 Roger Dean Erb, son of Allyn and Thelma (Wetzel) Erb, was born on January 26, 1961. He was the youngest of 6 siblings. He grew up on the family farm helping his dad and brothers. Roger played football while attending Irwin-Kirkman High School and while attending Iowa Central Community College. After college, he continued to work on the farm and started working at Farmland. Roger played slow pitch softball for many years. Over the years Roger enjoyed hunting and fishing. He and his buddies took trips to Colorado to go elk hunting in the mountains. Roger and Carol started dating in 1993 and he took on the role of “Dad” to four kids, Casie, Kris, Katie, and Matt. Roger and Carol finally married on July 17, 2004. Roger had lived in Irwin until he married Carol and then they moved to Harlan. Roger was quite the adventurer taking in every tourist site on every trip with Carol and the kids. Roger developed a love of scuba diving and after he obtained his scuba certification he took over 25 trips to Mexico and Honduras. He enjoyed spending time with family and friends and was always up for a good time and the last to leave the party. Roger loved his 7 grandbabies. He was a proud grandpa and loved getting to watch the older ones play sports. Roger had many nieces and nephews and always enjoyed seeing and talking to them. Roger was diagnosed with pancreatic cancer in November 2019. He fought up until the day he passed away. Roger had continued to farm until his death on August 4, 2020 attaining the age of fifty-nine years, six months and nine days. In addition to his parents, Roger was preceded in death by his brothers Gary and Dennis and sister Gloria Huff. He is survived by his wife, Carol Erb of Harlan; children Casie (Toby) Muller of Adair, Iowa; Kristopher (Amie) Mickelson of Earling, Iowa; Katie (Robert) Ranney of Ames, IA; Matthew Rasmussen of Hot Springs, SD; 7 grandchildren. His sisters Sharon (Richard) Monson of Harlan and Diana (Bill) Barton of Omaha; brother-in-law Dan Huff of California; and sister-in-law’s Myrna Erb-Gundel of Fontanelle, Iowa and Judy Erb of Omaha, Nebraska; several nieces and nephews. In lieu of flowers family suggests donations be made to Pancreatic Cancer Action Network pancan.org

Roger Dean Erb, son of Allyn and Thelma (Wetzel) Erb, was born on January 26, 1961. He was the youngest of 6 siblings. He grew up on the family farm helping his dad and brothers. Roger played football while attending Irwin-Kirkman High School... View Obituary & Service Information

The family of Roger Dean Erb created this Life Tributes page to make it easy to share your memories.

Send flowers to the Erb family.